Video Clip of Stephin Merritt Performance at the WGXC 10th Anniversary Drive-In: May 25, 2021

Jeff Economy and Alanna Medlock at the WGXC 10th Anniversary Drive-In: May 26, 2021

A live broadcast from the John Cage Trust, for mor...

Use the player above to... 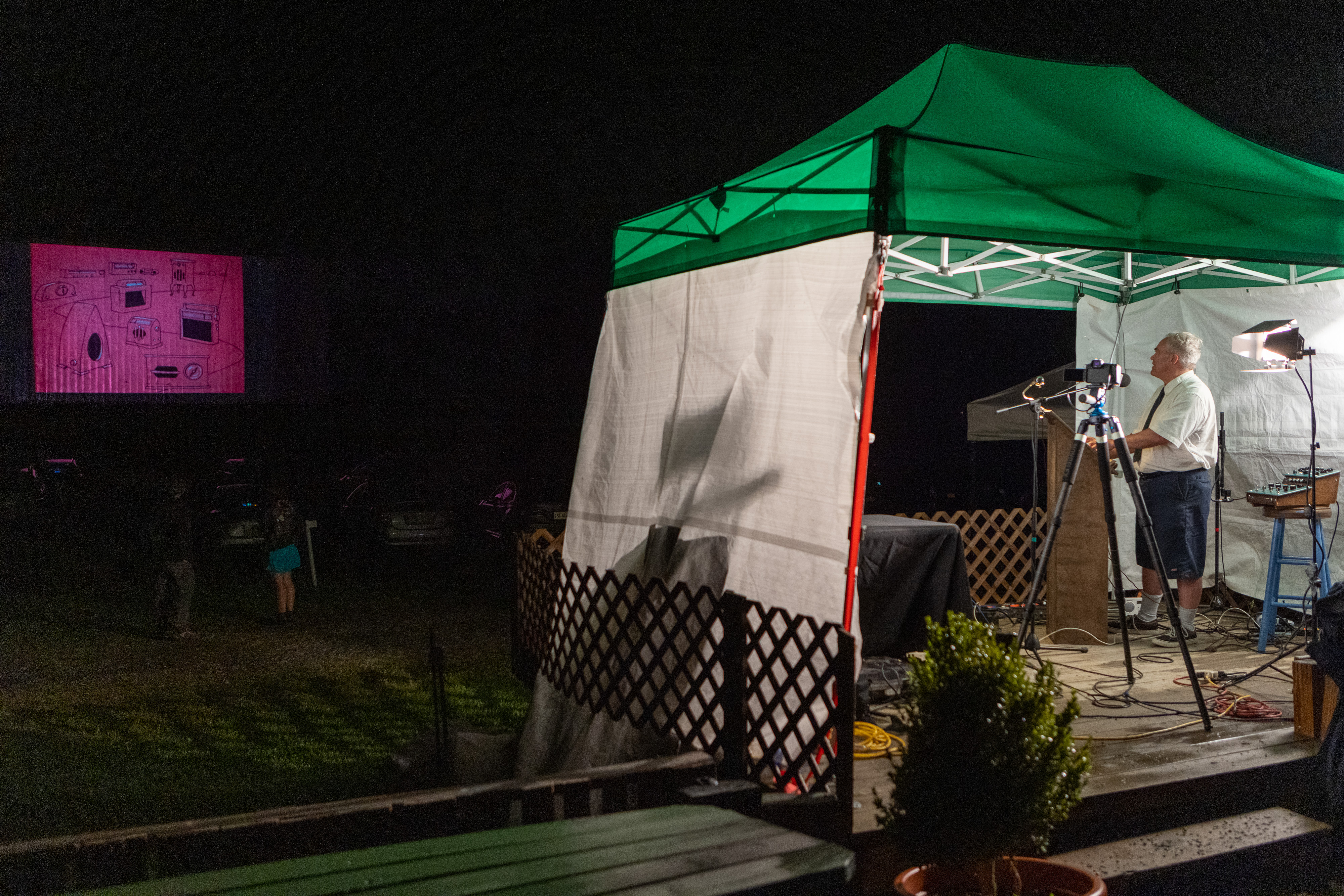 In 2021 Wave Farm's WGXC 90.7-FM celebrates 10 years of creative, adventurous, experimental, community radio for open ears on the Upper Hudson Valley's FM dial. Join us for a series of celebratory events on-air and in-person throughout the year:

February 26, 2021, 7 - 9:00 p.m.: Anniversary Broadcast: WGXC Awards
WGXC 90.7-FM, wavefarm.org/listen
Ten years ago, at 2 p.m. on February 26, 2011, with mere minutes to spare, WGXC powered on, transmitting 3,300 watts out to the Upper Hudson Valley on 90.7-FM. A large boisterous group assembled at the Catskill Community Center to celebrate. There, WGXC's first programmers took to the mic to introduce their shows and perform live on-air as part of the first ever WGXC broadcast. Join us ten years later for a very special ceremonious broadcast in honor of this official 10th Anniversary day.

April 24, 2021 Noon - April 25, 2021 Noon: DRONE AT HOME
Video livestream on Twitch / Basilica Website (Noon – 10 p.m. EDT)
24-hour audio livestream on Wave Farm’s Standing Wave Radio (Noon – Noon EDT) | LISTEN HERE
FM Radio Broadcast on WGXC 90.7-FM in NY’s Upper Hudson Valley (Noon – 6 a.m. EDT) | SCHEDULE HERE
For the past 7 years, 24-HOUR DRONE presented with Le Guess Who? has kicked Basilica Hudson’s season into bloom as a sacred wake-up call for the building in her winter hibernation. With all large gatherings still on hold due to COVID-19, this year we will bring DRONE to the airwaves in collaboration with Wave Farm’s WGXC 90.7-FM Radio for Open Ears.
Both organizations, Basilica and Wave Farm, will each invite five sound artists to contribute a 60-minute performance. Assembled, this newly commissioned 10-hour drone program will be the featured content for DRONE AT HOME 2021. Highlights from past 24-HOUR DRONE event archives will flesh out the rest of the 24-hour online broadcast.


Let's celebrate WGXC's 10th Anniversary together at the Greenville Drive-in! We're planning this event to scale as needed in terms of where we are with physical gathering. Either way, we think it will be an epic exploration of the number 10! Wear your most festive attire and bring your favorite radio for the LoveShack photo and recording booth. Most importantly come ready to celebrate.

NOTE: All performances and DJ sets will be projected onto the Drive-in screen and transmitted to your car radio. Entire program runs 110 minutes.
Here's the line-up:


August 7, 2021, Audio Buffet 2021 and Programmer Picnic
WGXC 90.7-FM, wavefarm.org/listen
Wave Farm's sixth annual Audio Buffet and WGXC Programmer Picnic will take place on Saturday August 7, 2021. In 2015, Pauline Oliveros and IONE donated the 32-channel mixing board they once traveled the world with to Wave Farm. Their generous and meaningful donation serves as the fulcrum for the Audio Buffet event, where dozens of acoustic and electronic sound artists come together for a live collaborative and improvisational radio performance on Wave Farm's WGXC 90.7-FM from 2 - 4 p.m. The broadcast is followed by a WGXC Programmer Picnic.

October 23, 2021: John Cage’s Rozart Mix, realized by artist Aaron Dilloway
The John Cage Trust 1309 Annandale Road Red Hook, NY 12571
Newly realized by former Wave Farm Residency Artist Aaron Dilloway, the installation at the John Cage Trust will be an expansive, multi-level, visual, and sonic work, with collaborating tape players including Rosie Actor-Engel, Twig Harper, C. Lavender, Quintron, Robert Turman, and John Wiese. In keeping with Cage's score, a minimum of 88 tape loops will be employed. The tape loops will be made to run on 12 reel-to-reel decks positioned in various rooms and floors of the John Cage Trust building, winding up stairs and around furniture. Visitors will be immersed in a kinetic and audible drawing. As was the case in the first performance of Rozart Mix in 1965 at Rose Art Museum at Brandeis University, the content on the tape loops will include field recordings as well as voices; however, in this new iteration the sound materials will be sourced from the over 100 volunteer programmers who contribute programming on Wave Farm’s WGXC 90.7-FM. This event serves as a culminating celebration of WGXC's 10th Anniversary year. More information at wavefarm.org/rozartmix.

A big thank you to our 10th Anniversary Underwriters!