Cloud Points: A Derivative of Crude Illumination i...

"Routing Around" is informed by the origin story o...

This presentation was possible in part with public...

This presentation was possible in part with public...

The zine "Routing Around" was produced in conjunct...

Tune in or turn out for a live broadcast from Lodg...

Tune in or turn out to this live edition of the WG... 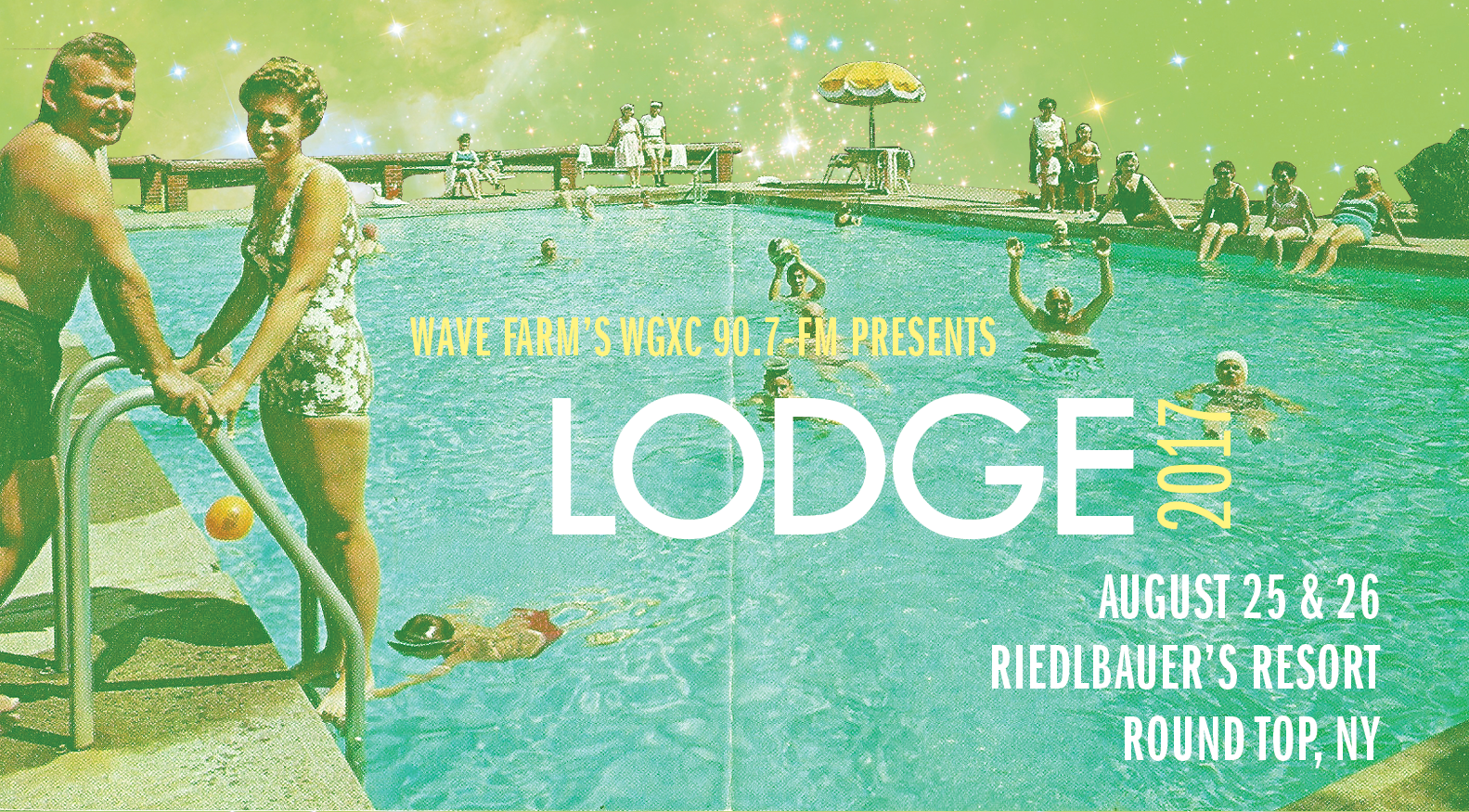 Lodge 2017 kicks off 8 p.m. on Friday, August 25 with performances from Alexander Turnquist, Laraaji, Kraus, Lily + Horn Horse, a live DJ, and others to be announced. Tickets are $15 in advance, or $20 on the day of. On Saturday, August 27, Lodge expands throughout the Riedlbauer's grounds, with WGXC DJs starting at noon at Nussy’s Bier Garten. Interactive installations by Elia Vargas and the Catskill Maker Syndicate will be on view nearby. Rory Solomon will present a workshop based on his CB radio work, completed while in residence at Wave Farm. Live music begins at 7 p.m., and features performances from Larkin Grimm, Scratch Ticket, Pigeons, Nick Millevoi, and Devin Gary & Ross. WGXC’s DJ Lunar Moss contributes interstitial sounds throughout the evening.

Since 2014, WGXC has presented Lodge on the grounds of the beautiful Riedlbauer's Resort in Round Top. Past years have featured performances from Magik Markers, Palm, MV & EE, P.G. Six, Chris Forsyth, Thalia Zedek Band, Herbcraft, among others. Lodge began in 2014 as a one-night concert under the pavilion at Nussy’s Bier Garten. Lodge 2015 expanded from mere concert to a family-friendly afternoon retreat, and featured Wave Farm artist-in-residence Heidi Neilson’s radio transmitter scavenger hunt in the woods of Riedlbauer’s, along with Catskill musicians Carmen Borgia and Foggy presenting their Uke Camp. Lodge 2016 featured installations artists, including Bryan Zimmerman and Victoria Keddie’s Unit 11 mobile residency van, amateur radio demonstration, and a limited edition t-shirt by illustrator Casey Burns, who returns with a new design for Lodge 2017.

About the music (Friday):


Hudson-based 12-string guitarist and composer Alexander Turnquist “is masterful. His right hand technique is as orchestral as Nick Drake's, sending rivulets of steel sadness out across the water, but applied to a minimalist logic with the weight of early Philip Glass or Steve Reich.” (Uncut) “By embedding both new age and noise-oriented electronic themes into his pastoral pieces, Turnquist unites disparate traditions and ideals, essentially employing sonic counterweights to construct 57 minutes that are as surprisingly dynamic as they are perfectly beautiful,” says Pitchfork.

Originally discovered busking in Washington Square Park by Brian Eno, Laraaji was invited to contribute to Eno's Ambient series. The result was the collaboration Ambient 3: Days of Radiance, featuring Laraaji's music as produced by Eno. Since then, Laraaji has released a dozens of ambient and new age work, and is considered a godfather of cosmic new age music. "...'Lotus Collage,' which Laraaji issued himself in 1978, situates his music at an intersection of drone and Terry Riley-style minimalism, with a bent-note attack that draws in the music of India. Laraaji described his musical epiphany in terms of a universal vibration, and his music seems especially attuned to the feeling of matter moving rapidly in space. It has an elemental quality and the textures are metallic (his zither is outfitted with a pickup, and tuned to favor open strums and drone), bringing to mind oud, harp, guitar, dulcimer, bells, mbira, chimes, and singing bowls." —Mark Richardson, Pitchfork.

NYC-based Lily + Horn Horse (Lily Konigsberg of Palberta and Matt Norman) met while attending Bard College. They began collaborating on recordings in 2016 with the release of the album “Horn Horse.” Their compilation “Lily on Horn Horse” was released in March 2017. Their sound “recall some of Arthur Russell’s deconstructed pop demos” (Stereogum), and ricochets from dreamscape to dystopian over the course of a single song. “Lily’s songs, like her work in Palberta, temporarily make use of an adapted genre before moving on to the next one. Whereas Palberta guts each track down quickly, here Lily inhabits the tracks with a proudly worn and comfortable mask. Lily’s fleshed-out songs sit nicely between Horn Horse’s freak-outs, yet a similar pessimism can’t be shaken.” —Post-Trash

Kraus is the solo project of American experimental musician and drummer Will Kraus. He self-released his debut record "End Tomorrow" in early 2016. Shortly after, it caught the attention of Terrible Records, who re-released it the following September. His rough yet sentimental music typically combines heavily manipulated melodic samples with live drums, guitars and vocals. Stereogum describes "End Tomorrow" this way: "Consider it a cocktail of My Bloody Valentine, Lightning Bolt, and Youth Lagoon coming at you with the force of a waterfall.”

About the music (Saturday):
Just released in June, Larkin Grimm’s latest album "Chasing an Illusion" (Northern Spy) is garnering acclaim. “Sorrowful lyrics against spirited playing create a magical crux on the experimental singer-songwriter’s latest, a powerfully maternal and spiritually yearning collection of dark folk music,” says Pitchfork in its recent review. Larkin Grimm is an American singer-songwriter and musician born in Memphis, Tennessee. At 20 years old she dropped out of Yale University and moved to Alaska, where she hiked and began to experiment with singing. Several months later she was convinced by a friend to return to Yale, where she began to record her first album, Harpoon, which was influenced by her experiences performing with the Dirty Projectors Larkin’s third album "Parplar" was released October 2008 by Young God Records.

���[Devin Gary & Ross] has delivered one of the most blinding psychedelic listening experiences of the last several anna. Only one of these darlings—Ross Goldstein—is known primarily as a musician. Gary Panter is one of our era’s premier visual artists, and Devin Flynn is among the age’s most berserk animation stars. But they have nonetheless managed to blast their way into the very center of a psych-specific cosmos that will make your fingers feel like sausages and your ears wobble as though they’re on stalks. The band has one prior record, the excitingly primitive Four Corners Bounce on Pete Nolan’s Arbitrary Signs label, but they truly arrive with Honeycomb of Chakras. Opening with a gorgeous bloot through West Coast Pop Art Experimental Band’s “Smell of Incense” they set a high bar, which they manage to hit every leap, no matter how cartoonish Gary’s voice sounds at times. They also manage to burn through killer versions of Family’s “See Through Windows”, Henske & Yester’s “Farewell Aldebaran” and a bunch of other monster ’60s brain ticklers, as well as coughing up their own material in way that makes you think you’ve heard it somewhere before. It’s a totally whacked effort, ending with a piece of spoken spuzz that demonstrates what it would be like to go to a Star Trek Convention, very high on bad acid, wearing cartoon hand puppets.” —Byron Coley

Nick Millevoi is a Philadelphia-based guitarist who explores and expands upon the sound of the electric guitar throughfrequent use of non-traditional tunings, feedback, and raw noise. He is a member of Many Arms (Tzadik), Archer Spade, and Haitian Rail, as well as a solo guitarist.

Based in Columbia County, Pigeons swerves between "rainbow-hued guitar solos ... [and] pastoral hippie folk ... recalling the Incredible String Band" (The Wire). Pigeons played at Lodge in 2015, but have since added Pat Gubler (P.G. Six) and drummer John Moloney to their line-up, which also features Wednesday Knudsen and Clark Griffin.

About the Artists + installations:
Rory Solomon's "Routing Around" is a participatory network inspired by CB radio's rapid rise in the US. In 1973, at the height of the OPEC oil crisis, Richard Nixon imposed the National Maximum Speed Law, limiting all auto speeds to 55 mph in an effort of fuel conservation. As a consequence, there was an explosion in CB radio employed by long haul truck drivers to establish an improvised information network for the purposes of avoiding “speed traps” and identifying well-stocked fueling stations. Today, many techno-utopian activists are deeply invested in building distributed information networks, usually using WiFi mesh infrastructure. At Lodge 2017, Solomon's project will manifest as a participatory workshop and performance using CB technologies.

Riedlbauer's Resort is a resort located in Round Top situated on 70 acres of Catskills forest. Since 1978, Riedlbauer’s has been operated by the Nussbaumer family. Riedlbauer’s is open year-round and hosts a number of festivals and gatherings throughout the summer and fall.

Scribner's Catskill Lodge is a bespoke mountain lodge in the heart of the Catskills, making it your perfect base camp for weekend adventures. Our onsite restaurant, Prospect at Scribner's, serves locally inspired dishes alongside handcrafted cocktails and 270-degree views of the mountains.

Presentations by Rory Solomon and Elia Vargas are made possible in part with public funds from the New York State Council on the Arts’ 2017 Electronic Media and Film Presentation Funds Grant program, administered by The ARTS Council of the Southern Finger Lakes.

Wave Farm programs are made possible, in part, by the New York State Council on the Arts with the support of Governor Andrew Cuomo and the New York State Legislature; the National Endowment for the Arts; The Andy Warhol Foundation for the Visual Arts; the Greene County Legislature through the County Initiative Program, administered in Greene County by the Greene County Council on the Arts; the Alexander and Marjorie Hover Foundation; the Foundation for Contemporary Arts; and hundreds of other generous individual donors.
https://www.facebook.com/events/1083374071762048
Tweets by WGXC