Celebrate free103point9 @ Ontological and the release of the current issue (#90) of Performing Arts Journal, which includes pieces by and about Richard Foreman : Oct 16, 2008: 6pm- 7:45 pm 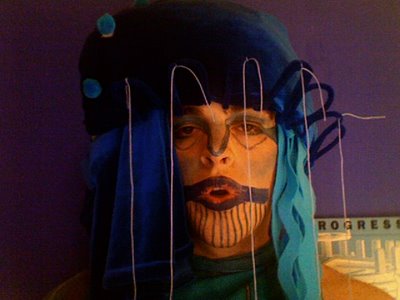 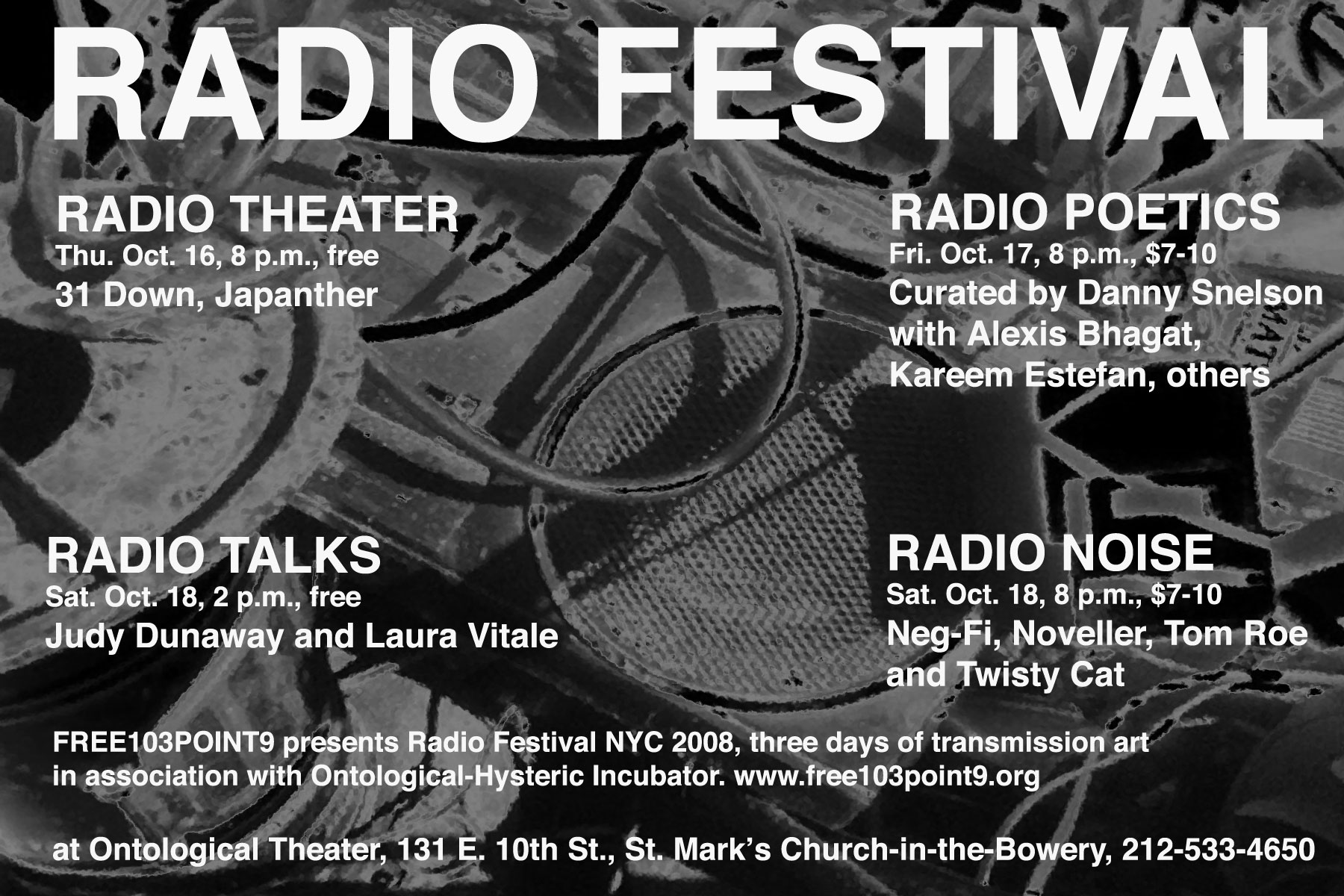 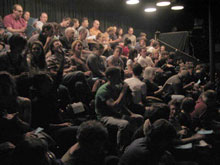 free103point9 presents a fall festival of radio art and experimentation presented during three nights and one afternoon featuring radio theater, poetics, presentations, and noise with live video web streams. Radio Festival NYC 2008 is produced in association with The Ontological-Hysteric Incubator. 31 Down radio theater presents "Assember Dilator," starring Caitlin McDonough-Thayer.
"An eye doctor and his assistant become lab rats in their search for xray vision through experimental eye drops." Formed in 2001 by Ryan Holsopple, 31 Down is a radio transmission-based theater company from Brooklyn, New York. The vision of the company lies in the hybridization of modern technologies with old technologies, systems, established genres, and forms. The theater company uses radio transmissions, wireless devices, and home security technology to expand and contract traditional theatrical spaces.

Japanther: Japanther began life as a one-off performance vehicle. The idea, as conceived by college friends Ian Vanek and Matt Reilly in their Brooklyn apartment six years ago, was to make a racket that could engage, provoke, and—if things went right—inspire their immediate audience. A working hybrid of art show and punk emerged. They’ve lived out of a van all over Europe, Australia, Canada, and the US, circling the international underground like hungry wolves. All the while they’ve been self-releasing and self-producing—keeping with the “Art Project” persona the group was founded on in 2001. In recent performances, Japanther employs Marionettes and giant puppets redefining what bands, groups, and gangs can do.

Joe Milutis, writer, media artist and author of "Ether: The Nothing that Connects Everything" (Minnesota 2006), will be presenting a transmission and a lecture on his research into the noise that comprises (and compromises) a wireless connection. . . asking, how great is it that "radios" are embedded in "Paradise Lost"?

Kareem Estefan is the host of "Ceptuetics," a weekly radio program investigating the poetics of conceptually innovative contemporary writers. He will be performing a self-interrogation as a retrospective of the voices and poetries aired on his show over the last year.

Alexis Bhagat, the co-editor of "An Atlas of Radical Cartography," is a transmission artist and writer. He will be performing in his latest four voice composition along with Tanvi Nessa, Stephen Mosblech, and Delia Springstubb. The multivocal reading will approach topics of memory and change.

Judy Dunaway will present Sex Workers’ Internet Radio Lounge (S.W.I.R.L.). Connected to the idea of “O-ton,” radio artists in 1970’s Germany who recorded and edited the voices of workers and prisoners to be aired on state radio programs, sound artist Judy Dunaway founded “Sex Workers’ Internet Radio Lounge” (S.W.I.R.L.) a not-for-profit 24/7 webstream of audio art and activism by sex workers. The stream was broadcast from January 2007 to May 2008. It featured stories, poetry, interviews, speeches, panel discussions, original music, and other audio art created by current and former sex workers. In August 2008 SWIRL was converted to an audio archive, which may be accessed at: http://www.jeweltone16.org/swirl/. Throughout her 20 year career as a sound artist, Judy Dunaway has consistently pushed artistic and sociological boundaries in her work. She is a composer, improvisor and conceptual artist who is primarily known for her sound works for latex balloons. Since 1990 Judy Dunaway has composed over thirty works for balloons as instruments and has also made this her main instrument for improvisation. Dunaway has also created other works, often to do with cultural critique or social activism.

Artist Laura Vitale will present works that illustrate her exploration so far of literary, painterly, and musical themes in radio. She will also play works from which she has drawn inspiration. Laura Vitale is a sound/radio artist living and working in New York City. She is the 2008 Van Lier Fellow at Harvestworks Digital Media Arts Center. Vitale’s work is concerned with literary, painterly, and musical themes in radio.

Noveller: Utilizing the pick-ups on her double-necked guitar, Noveller will explore the interaction between the stringed instrument and several electronic devices, including a hand-held radio, a tape player, and ebows.

Tom Roe: Performs with walkie-talkies, scanners, FM radios, and other receivers and transmitters, to craft noisescapes that sample pop culture.

Twisty Cat: Ed Bear + Lea Bertucci + Tianna Kennedy: "We're going to play acoustically but process and record tape loops and feed them into a transmitter then slowly turn up the radios so at the end you'll hear the processed sound and not the acoustic."