Club Helsinki restaurant opens today
"The Restaurant at Helsinki Hudson" opens today with Executive Chef Hugh Horner at the helm. Horner was recently at café madison in Albany, where Metroland praised his work saying, "Horner's North Carolinian roots come through in dishes like braised short ribs." Helsinki's restaurant is open every day except Wednesday, at 405 Columbia St. in Hudson.

Openings and closings
John Doe Records -- once of the 500 block of Warren St., once of the 300 block of Warren St., lately at a warehouse on Front St. -- opens in its new home along the Public Square, or Seventh St. Park, at 4 Park Place in Hudson on Friday in a storefront that had been a temporary costume shop in late October.... The Hudson Farmer's Market just closed its outdoor season, and will try an indoor sale from 9 a.m. to 1 p.m. Dec. 11 at the Claverack Dutch Reformed Church, Lindsay Suchow in the Register-Star reports.... Migliorelli Farm just shuttered its Hudson storefront, on the corner of 3rd and Warren Sts.... Several sources say Mod Gourmet Cafe in Catskill is the latest shop to close up there, but are moving to Front St. in Hudson.... River Street Bakers in Catskill also recently closed. 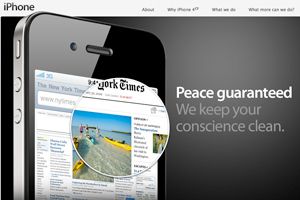 [/caption]Yes Men target Apple
Fast Company reports The Yes Men, based just north of our area, targeted Apple's iPhone for their latest prank. "On Tuesday, they launched a website that was a spitting image for Apple's, and professed to be announcing a new product: the iPhone4CF. "CF" stood for conflict-free, and the site promised that the new phone was exactly like the normal iPhone 4, only it didn't source its minerals from conflict-ridden regions like the Democratic Republic of Congo, thereby fueling atrocities there," David Zax wrote. Apple quickly got the group's website host to take down the site. Mother Jones points out the group was not really targeting Apple, as their press releases says, "Although Apple does have plans to certify its materials as conflict-free, this will by no means be any sort of solution to the situation of conflict in the Congo, nor in any way help bring an end to that conflict. Rather, the solution must be based in diplomacy."