[caption id="" align="alignleft" width="200" caption="The Furgary Boat Club alongside the river in Hudson, as seen in a photo from the Gossips of Rivertown blog."] 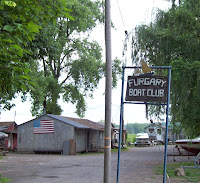 [/caption]The Register-Star is reporting on a motion to dismiss filed by the City of Hudson in its defense against a lawsuit filed by the Furgary Boat Club in an effort to officially claim ownership of land in the North Bay along the river, where the club of ramshackle fishing shacks has existed on state-owned lands for generations. Those lands are now pegged for transfer to the City. The Furgary, calling itself the North Dock Tin Boat Association Inc. in court papers, filed an adverse possession or “squatter’s rights” lawsuit in June, 2010 against the city of Hudson, the state Office of General Services as well as 18 of the descendants, heirs and devisees of the city’s original founders. Victor Meyers of Hudson law firm Rapport Meyers, who is representing the city in the case, said a motion to dismiss the lawsuit was filed in December.

The question of who owns the land, at the intersection of Front and Dock streets, arose as the city finalized plans to upgrade the wastewater treatment plant next door in 2009. The city was informed that the land on which both the Fugary club and the sewer plant sit was owned by the state. The state swapped the 14.45 acre parcel for underwater acreage in the Hudson River and deeded it to the city.

The shanties which sit on the land in question have been passed down from generation to generation for decades; those who frequent the club use the cabins and the land for socializing, fishing and storing equipment. The land has been unregulated and untaxed for almost 100 years.

“The state still owned, and could grant, the boat club property in 2009,” asserted Meyers.

But the Fugary claims in its suit that the land was originally purchased in the late 1700s by the founders of the city, known as the Proprietors. The club’s attorney, Scott C. Paton of Albany law firm McNamee, Lochner, Titus and Williams, P.C., said a title search unearthed the original deed for what was then called Claverack Landing, and that there is no evidence that the deed was ever switched.

“That’s the real issue: What did the state grant to the Proprietors?” Meyers said. “If we can show, based on documentary evidence, that they don’t have a claim — and, of course, the state agrees with us — I think ultimately we hope to be successful on our motion to dismiss.”

Meyers thinks the end result is inevitable — that the Furgary will be unsuccessful in its attempt to prove ownership of the land.

“They’re trying to buy some time to stay another year or two,” said Meyers, adding, “These folks — they are squatters. They don’t have deeds, they don’t pay taxes. It’s a nice life.”