[caption id="" align="alignright" width="200" caption="The Maetreum, in Palenville, is proving that state and federal religious tax exemptions apply to town and county taxes in Catskill and Greene County, as well."] 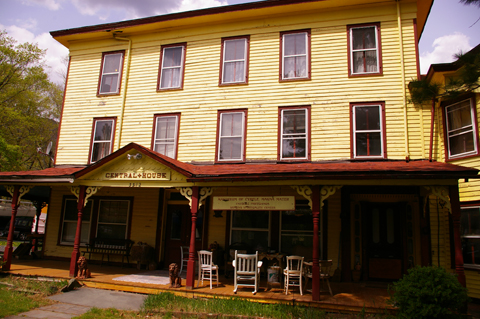 [/caption]The Watershed Post reports on a Palenville case where a local judge has found that a group of self-described witches may have gotten special treatment from the town of Catskill – and not in a good way. "In a strongly-worded decision issued on Tuesday (February 22), Judge George J. Pulver, Jr. of the Greene County Supreme County ruled that the town's denial of a property tax exemption for the Maetreum of Cybele smacks of discrimination," WP's Lyssa Harris writes. “Consistent with [the Matreum's] claim that it is being discriminated against, respondents' counsel attempts to hold petitioner to a higher standard than other religious organizations,” Pulver wrote in the decision, referring to Greene County attorney Carol Steven's decision to not recognize federal tax exemption status for the religious organization. Denying Catskill's request that he dismiss the case, Pulver wrote that the town, through its attorney, made “vague” and “subjective” arguments about the religious practices of the Maetreum in an attempt to justify its decision.

He also ordered Greene County to refrain from foreclosing on the Maetreum's Palenville property for unpaid property taxes, which the organization refused to pay saying they were tax exempt, until the completion of the lawsuit. "The decision is the biggest victory for the pagans in their years-long battle with Catskill over whether or not they are exempt from property taxes as a religious group," Harris concludes of the case stretching back to 2007, when a town attorney advised not to accept the Maetreum's state and federal tax exemption. "In 2009, the Maetreum filed this lawsuit in the state Supreme Court accusing the town of religious discrimination... In his most recent argument to the Supreme Court, Vincelette wrote that because religious activity at the Maetreum was limited to 'occasional events,' the use of the property was not religious. Pulver's decision demolished that reasoning." The argument that religious events at the Maetreum are too infrequent “has no basis,” Pulver wrote in his 14 page decision, and is a “subjective standard” that “is so vague that it would wreak havoc if it were generally applied to religious organizations in Greene County.” The judge, however, declined to order the town to grant the Maetreum a tax exemption, writing that the Maetreum had not proven that it deserved one.