[caption id="" align="alignright" width="200" caption="Building demolition on Robinson Terrace in Hudson last Friday, January 14, may have been for a garden and not new units designed to replace Bliss Towers, the city's low-income housing recently rendered irreparable."] 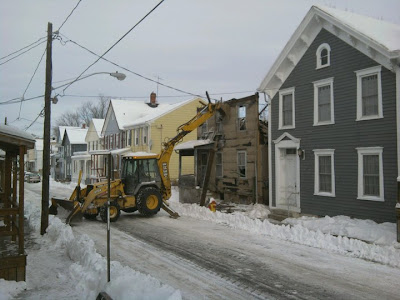 [/caption]Thanks to Carole Osterink of The Gossips of Rivertown for bringing to life all that's really involved in urban renewal in historic towns and cities like our communities here in the WGXC coverage area. Her blog currently has a photo up (seen at right) of a house being demolished on Robinson Street in Hudson last Friday, just one of a list of buildings identified as "demolishable" to make way for the new units needed to replace Bliss Towers, the former low-income housing in the City of Hudson now rendered obsolete. Although Osterlink notes that the demolition "seems to have no connection with that project" and may actually have more to do with a neighbor's wish to "have a garden," it's an apt demonstration of how tenuous our communities really are.

The Register Star had a story on efforts to replace Bliss Towers, and all behind it, following a city Common Council meeting on the issue last week where Habitat for Humanity spoke about its plans for the site commonly known as Diamond Park (242, 244 and 246 Columbia St.). The homes Habitat is proposing with built-in approval deadlines would be constructed in a “federal style,” considerably different than the homes Habitat usually builds and similar to the attached townhouse the organization will soon finish at 444-446 Columbia Street.

In September, Hudson Housing Authority Executive Director Jeffrey First confirmed that the HHA plans to demolish Bliss Towers, ending a nearly decade-long discussion over whether to renovate or replace the affordable housing complex. The HHA wishes to gain site control, by way of a resolution from the Common Council, of a slew of “demolishable” properties — among them, the same exact site on Columbia Street which Habitat has its eyes on.