[caption id="" align="alignleft" width="200" caption="The Maetreum of Cybele, a Palenville-based pagan group, were just served foreclosure papers by Greene County for nonpayment of taxes in the midst of a legal battle over their tax exempt status involving the Town of Catskill. Photo from the group's website."] 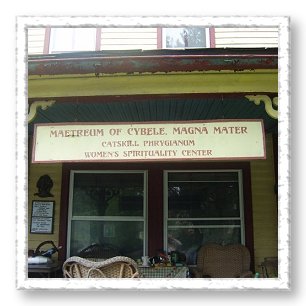 [/caption]A pagan group that wants the town of Catskill to recognize it as a religious organization may lose its Palenville home before the end of the year, according to a Watershed Post story about how Greene County is beginning a foreclosure process that could exile the Maetreum of Cybele, a pagan community that owns the former Central House hotel on Rte. 23A in Palenville, before the two court cases are decided on whether the town practiced religious discrimination in recent years when it refused the non-profit's tax exemption status. The County's Treasurer's Department has started proceedings against the Maetreum for $13,835 in unpaid taxes and interest on the Palenville property. On January 15, Ellen Crouse, the Greene County Director of Taxes, sent the Maetreum a letter demanding payment in 60 days. The group has been fighting the town of Catskill over property taxes since 2007.

The town of Catskill granted the Maetreum, who have federal 501(c)3 tax exemption status, tax exemption for 2006, but then denied the exemption in 2007, claiming the property did not conform to the real property tax law’s definition for an exempt not-for-profit religious organization. The new town treasurer, Peter Markou, previously served as the Catskill town superintendent.

Crouse told the Watershed Post last week that if the tax bill remains unpaid, the foreclosure process on the Maetreum's property could begin in late February.

Cathryn Platine, the spiritual leader of the Maetreum, was shocked by the arrival of the foreclosure letter. In the fall, the Maetreum's lawyer filed a motion requesting that the foreclosure be postponed until the lawsuits had finished. In November, Greene County Attorney Carol Stevens seemed to agree to put the foreclosure process on pause in a letter now posted on the Watershed Post website.

"The county attorney wrote our attorney two months ago stating that no foreclosure proceeding would begin until after the two legal cases ongoing were decided," Platine said. "Given everything that has gone on before, this cannot be taken as a miscommunication."

Crouse said that the county's plans to foreclose are not final, and that she did not know whether the county had agreed to pause the foreclosure process.

Foreclosure or no, the Maetreum's legal battle shows no sign of flagging. Platine said earlier this month that she would take the case to federal court if necessary. But the Maetreum's war chest is being drained by the conflict.

"So far we have held our own with some help from Pagans out there but we are getting in over our heads on fiances," Platine has written. "We are poor. My only income, for example, is SSI disability for job related back injuries. Yet even without resources, in the past six months we have provided four people with needed housing assistance and food. We seriously need help. We need donations and they are fully tax deductible. We need support from the Pagan community spiritually and magickly. Please, no curses but bindings and reveals would be in order. And of course energy for us because this is beyond draining on our own internal resources."