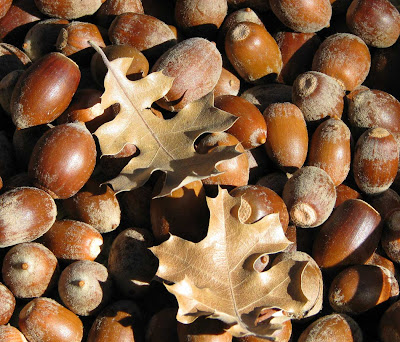 Richard S. Ostfeld and Charles D. Canham's story "Acorn glut signals Lyme risks" appeared in the Poughkeepsie Journal, although it seems to be missing from their site, but has reappeared at the Cary Institute of Ecosystems Studies, where they work as scientists. The article is definitely worth the archiving.

"Our research predicts the acorn bumper crop of 2010 will cause a mouse population explosion in 2011, which in turn will result in abnormally large numbers of infected nymphal ticks in the summer of 2012."

Ostfeld and Canham write that this year the four most common oak species — red oak, black oak, white oak and chestnut oak — all are producing bumper crops of acorns, known as a "mast year." "In the 20 years we've been monitoring tree seed production, this is the first time we've seen such an acorn glut," they write. Acorns are loaded with protein and fat and are eaten by many wildlife species: squirrels, chipmunks, mice, deer, raccoons, turkeys, blue jays, and bears all eat acorns. The evolutionary idea is "predator satiation," so that in bumper years not all seeds are eaten, and some become trees. White-footed mice, the most common mammal in our region, eat a lot of acorns, they report. In mast years, mice can stay put near acorns and avoid owls, hawks, and foxes. Well-fed mice start their spring breeding season earlier than usual, so, "We expect the forests and fields to be teeming with mice in the summer of 2011," they write. So more acorns lead to more mice, which leads to more ticks:

"Research we've conducted with Bard College biologist Felicia Keesing shows newly hatched blacklegged ticks that feed on white-footed mice are much more likely to survive than are ticks that feed on any other mammal or bird host. We've also established that about 90 percent of the larval ticks that feed on mice become infected with Lyme disease bacteria. So, we predict that in 2011 large mouse populations will lead to an increase in the survival and infection of ticks. This is bad news for human health. Mouse-fed larval ticks from 2011 will sit quietly on the forest floor for almost a year until they emerge as nymphs — the stage responsible for transmitting the vast majority of Lyme disease cases. Our research predicts the acorn bumper crop of 2010 will cause a mouse population explosion in 2011, which in turn will result in abnormally large numbers of infected nymphal ticks in the summer of 2012. We have been tracking acorn production by Hudson Valley oaks for 20 years and have consistently seen a spike in cases of Lyme disease in Dutchess County residents two years after large acorn mast years."