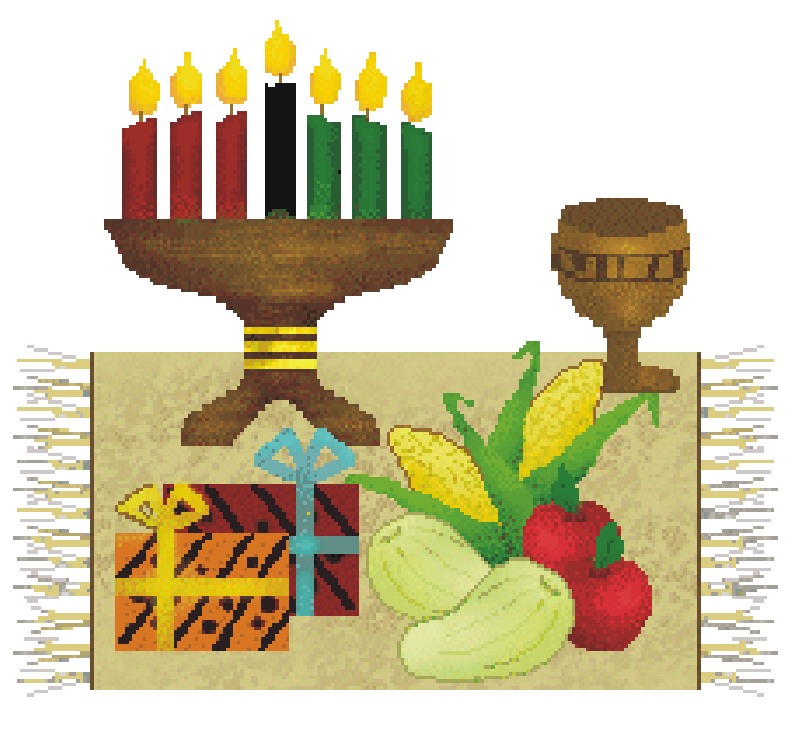 [/caption]The Hudson Opera House held a preview celebration of Kwanzaa Saturday afternoon, the holiday which takes place over the seven days from Dec. 26 to Jan. 1. Operation Unite Director Elena Mosley, who puts together the preview celebration each year, told the gathering that Kwanzaa was created 34 years ago, Kwanzaa, which means “first fruits” in Swahili, according to a story in today's Register Star.

* The mat, or mkeke, represents the foundation. “A good foundation leads to a strong world,” Mosley said. “Are you teaching your children the ABCs and the 123s before they enter school, or are you putting it on the school district?”
* The candleholder, or kinara, hand-carved of wood, she said, “gives us the opportunity to start our civilization, to look at our population, respect motherhood and populate the world.”
* The candles, or mishima, are red, black and green, the colors of the African-American flag. Red represents struggle; black represents the race; and green stands for Mother Earth. Each day of Kwanzaa, another candle is lit, representing one of the seven principles of Kwanzaa.
* The cup, or kikombe cha umoja, representing unity.
* The mizaya, or fruits and vegetables, are similar to what would be depicted in a Thanksgiving tableau; the most important food symbol is the muhindi, or ear of corn, which represents the children.
* The wrapped gifts on the table, or zawadi, are meant to remind one of ancestors and family. “You can give one gift each day of Kwanzaa, or you can wait until the last day,” Mosley said. She suggested children could make unity wreaths, books or photo albums to help the family keep its ancestors in mind.

This was followed by the candle-lighting ceremony, in which mature community members lit the seven candles and younger people raised up placards representing each of the seven principles of Kwanzaa: Umoja, or unity; Kujichagulia, or self-determination; Ujima, or collective work and responsibility; Ujamaa, or cooperative economics — “it’s all about putting money in your community,” Mosley said. “Are you remembering the local businesses in your community?”; Nia, or purpose; Kuumba, or creativity — “leaving your community better than how you found it”; and Imani, or faith — “faith in ourselves, our families and our communities.”

Hudson Area Library Director Corey Flemming called the library “one of the most important educational institutions ... When school is closed, the library is open. Parents, read to your children. I’ve noticed children just come to use the computers.” He threatened to “kick them off and introduce them to books,” and repeated his plea to parents to read to their children.

Operation Unite President Greg Mosley said the Unity Cup presented a “time to give thanks and remembrance ... Take a moment to think about someone who has had an influence on your life, who has made a difference in your life.”

He asked anyone who wanted to, to take a “symbolic sip” of the empty goblet, then pour a symbolic libation to “someone in your life.”

Then Mosley suggested others who were more shy remind themselves to “stop for a moment and give thanks to someone who meant something to you. Also, teach your children. If you don’t tell your children what your grandfather did, about their heritage, their history, it will disappear; you will have none. Do that one time in the course of the year.”

Susan Saltman then spoke about the photographs by herself and Carol Gans that are currently on display in the Opera House.

“Hudson has a sister city, Pallisa, Uganda,” Saltman said. “Elena [Mosley], Carol Gans and I went over there and took the photographs you see. The animals were from Kenya. The people live much more poorly than we do here.” She said money is being raised to buy mosquito netting for medical tents, and urged people to buy the craft items for sale.

Meanwhile, music and dance were woven throughout the program, whether it was the Beethoven and Chopin-with-improvisations piano pieces of Vladimir Pleshakov student Oswaldo Rosete, or the Bach piano piece of Sisk student Olivia Williams, the African dancing of Moirelle Braithwaithe, or the infectious improvisations of the Kuumba Dance and Drum Troupe.

Following the program, all were treated to a sumptuous feast of chicken, green beans, macaroni and cheese and pumpkin pie provided by Hazel Murray, and Kwanzaa presents were given to all the children.
Hudson Hudson Opera House holiday celebrations kwanzaa Elena Mosley
Tweets by WGXC