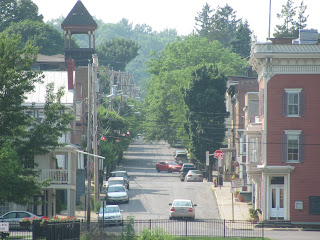 Melanie Lekocevic is reporting in The Daily Mail on public reaction to a proposed public nuisance law in the village of Athens. The law would expand the powers of village government to oversee and penalize abandoned or damaged properties, and homes where illegal activities are taking place. Officials argue the legislation is needed to ensure a certain quality of life is maintained. Dozens of critics, concerned with implementation of the law, turned out for the recent public hearing. Some said the proposed law would put too much power into the hands of village officials. There was also concern that power would be misused. Others argued existing laws were sufficient, if they would be enforced. Following the public hearing, the Village Board chose to table the measure. Mayor Chris Pfister said the law will eventually come back to the board for a vote. He said, "...it will be a good thing for the community and a necessary tool." Read the full story in The Daily Mail.
Athens Chris Pfister gentrification Athens Village Board quality of life public nuisance law abandoned properties damaged properties expansion of government power
Tweets by WGXC