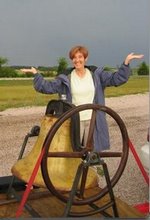 December Sunwatch is an online radio event, part of Brenda Hutchinson's dailybell2008, a yearlong project dedicated to the observation of the sun every time it crosses the horizon and to sharing the awareness of that moment with others. Hutchinson began the project on New Year's Eve 2007. To celebrate the last month of the project for this year she has invited 30 people from all over the world to choose one day to observe and document a sunrise or sunset. The invitation is open-ended and responses could range from poetry and performance to recordings of local soundscapes. free103point9 will broadcast a different piece each day at noon EST (-5 GMT) from places throughout the US and Canada as well as from Europe, Korea, and Nepal. This month long series was instigated by Barbara Held who together with Pilar Subirà curates "Lines of Sight," a bi-monthly online radio program, which takes its name from the interconnected points of the global resonant space created by radio and other wireless technologies. dailybell2008 and other work by Brenda Hutchinson, along with Jon Brumit, are featured in this month's "Lines of Sight" program #6.