Tune in for online video and audio streams of work... 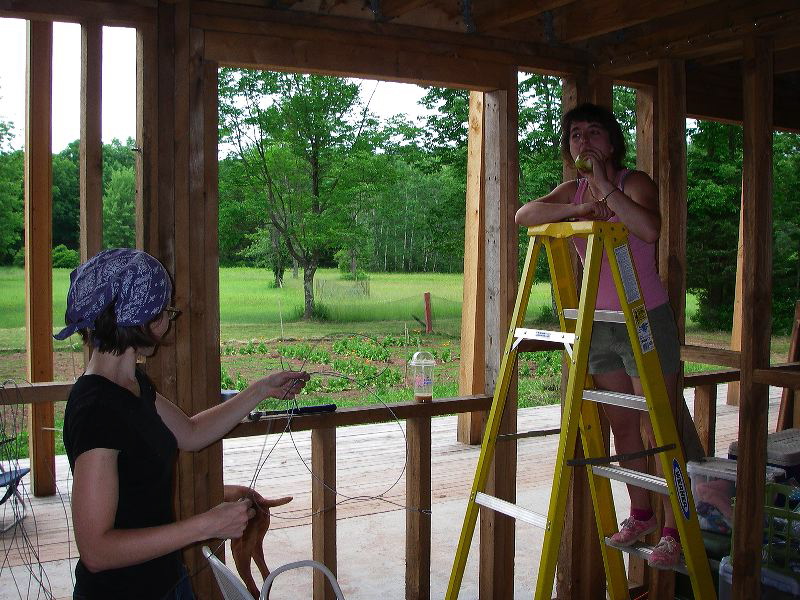 There is a grid of small wooden blocks hanging from the ceiling of the space. Each block is attached to the ceiling via a piece of string and hangs about 6" above the floor. In the middle of the grid is a motor with a piece of wood attached to it. Hanging in front of the grid at mouth height is a wooden panel with the word "puff" on it. The panel is an air-activated switch -- blowing on it turns on the motor. When the motor spins it strikes the surrounding blocks of wood. Those blocks in turn strike their neighbors, which then strike their neighbors, and so on. The spinning motor acts like an impulse, injecting energy into the grid of wooden blocks. As the blocks knock into one another that energy slowly spreads throughout the grid.

This is roughly analogous to what happens when you blow, clap, or otherwise introduce a sudden burst of energy into the air. Your action displaces air molecules, causing them in turn to displace their neighboring molecules. This action reverberates though the air, transmitting the energy from your action to distant parts of the space. The reverberation in puff bang reverb is quite slow; it can take several minutes for the energy from one puff/bang to reach the edges of the grid. It's fun to blow on the air switch and watch the motor spin, but it's even nicer to then step back and wait while the effect of your action slowly ripples through the grid."

puff bang reverb was commissioned by and presented in a shipping container at Festival Rümlingen 2005. A larger version was installed as part of the [silence] show at Gigantic Art Space, winter 2007. It is currently installed for the duration of summer 2007 at the free103point9 Wave Farm.

Many people have helped fabricate and install the various versions of puff bang reverb. It's a big piece, and I'd never be able to do it without their generosity. Thank you all! Helpers include: Amy Benson, Victor Adan, Jeff Snyder, Sam Pluta, Katherine Valdes, Collin McChendo, Ranjit Bhatnagar, Rory Solomon, Tom Bogaert, Kyle Lapidus, Tali Hinkis, !Rama & Dlisah, Tom Roe, Noel Hidalgo, Victoria Estok, Mara Barenbaum, the staff at Festival Rümlingen, the staff at Gigantic Art Space, the staff at Wave Farm. If I forgot anyone, please let me know! Thanks!!! - Douglas