Live from the Winter SWL Fest 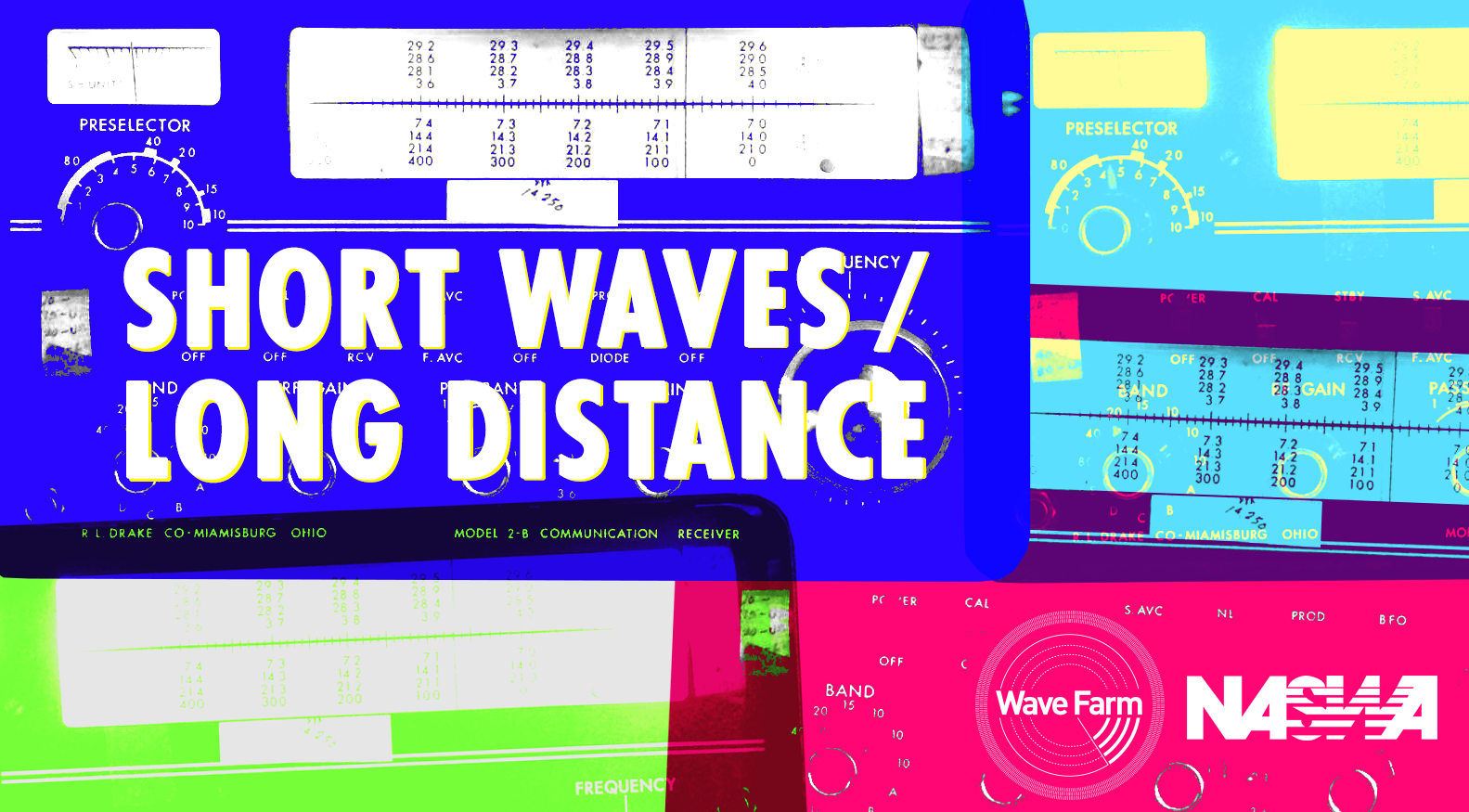 Wave Farm Radio is pleased to present a live stream of the 2017 Shortwave Shindig program at the Winter SWL Fest. Organized by David Goren, this year, the second and third hours of Shortwave Shindig features "Short Waves / Long Distance," a program presented in collaboration with Wave Farm, comprised of 15 works selected from an international open call. Friday March 3, 2017.

1. Elegy for RCI Lee Rosevere
01:48 A short piece intended to emulate the type of radio IDs or stings that might be played on shortwave radio stations. Written in memory of RCI, and features samples from Amanda Dawn Christie’s documentary Spectres of Shortwave.

2. MODULATION I JAVIER SUAREZ QUIROS
07:31 This work reflects on modulation as a long-distance information transmission mechanism. Either digital or analog, modulation builds a relational structure between different signals that, beyond the physical staff, has an unquestionable artistic interest due to its inherent sound richness. Digital sound processing helps to improve the acoustics possibilities of the sources to make a sonic reinterpretation of the radio wave spectrum. The signals used in Modulation I come from PSK31 QSO on 20 meters band, radar transmissions on 6 MHz, RTTY activity on 14085 MHz and shortwave broadcast on 19 meters band.

3. Caller Ed Osborn
05:22 Caller (2017) is made from a shortwave recording of a song performed with voice and gamelan. The recording is processed and transformed to build a bed of sound from the vocal and instrumental melodies found in the recording.

4. ondes simultanee et pertuber Patrick Harrop
05:24 I have been long fascinated with the vast aural complexity of short wave radio. More than the figurative and narrative content, the white noise of an infinity of pulses and waves that can be uncovered with the most minimal of sonic perturbations. The short piece here is one of many that are essentially “self-generated” by composing a scenario of minuscule and minor frequency modulations. The sound, on its own terms is so deep and so profoundly full that the slightest gesture reveals a radically different piece. In this sense, short wave radio is closer to the haptic virtuosity of an acoustical instrument than a digital one.

5. Fringe Area William Basinski
07:15 Analogue tape loop and shortwave radio piece from Shortwavemusic created in 1982 in Brooklyn, NY. William Basinski is a classically trained musician and composer who has been working in experimental media for over 30 years in NYC and most recently, California. Employing obsolete technology and analogue tape loops, his haunting and melancholy soundscapes explore the temporal nature of life and resound with the reverberations of memory and the mystery of time.

6. St Columb Major – transmission recieved Mark Vernon
08:38 St Columb Major – transmission received is composed entirely from a 20-minute shortwave radio scan recorded in the village of St. Columb Major in Cornwall, England at 1pm on the 16th September 2011. The radio was a 1970’s Grundig Yachtboy 210 which for an old wireless has quite an amazing bass response. Even so, you can hear the speaker rattle during some of the low frequency pulses. During the recording the microphone was moved around in front of the speaker to create a more dynamic stereo effect. The most unusual and otherworldly sound incidents were picked out, processed and layered over an 8-minute section of the scan. The piece resolves with an abrupt switch back to banal FM radio, rudely snapping the listener out of their reverie.

7. Let’s absorb the waves as we hold on for dear life Nicholas Knouf
04:35 I turn on the radio. I hear a voice, a Voice of this Country, broadcast to the world. It’s propaganda, I know. But it’s still a voice that projects outward, rather than the insidious inwardness that pervades the world and causes all our Voices to be diminished through interference. There are the voices of machines, secrets out in the open, alien warblings meant not for human ears. The Voice returns: present, but distorted; always repeating, always different.

8. a lagoon, considered against its archival image Sally Ann Mcintyre
07:57 During a six week artist residency on Kapiti Island, a nature reserve on the coast of New Zealand, I explored radio transmission and reception as a way of reading the materiality of environmental signal, via mediums such as VLF receivers and mini FM. On May 9th, 2012, I took a multi-band radio receiver once used as a maritime communication device into three very different environments, and recorded this device tuning in to signals on the shortwave band on the shores of a lagoon, in a grassy field, and at the site of a demolished lighthouse on the shoreline. With the 2012 Transit of Venus almost upon us, I couldn’t help but reflect on the possibility of tuning into the electromagnetic emissions of planetary events, and also the ways in which astronomical way-finding and scientific practice were crucial parts of the histories of these islands, with the sighting of Aotearoa/New Zealand by Captain James Cook’s crew aboard the Endeavour as a side-effect of their mission to observe the 1769 Transit of Venus. This is the first of the three pieces made from these three recordings. It was released as part of the album three inclements (the ocean does not mean to be listened to) by Radio Cegeste, released on Consumer Waste.

9. Oracle Edward Ruchalski
03:27 Oracle was created by using source material from various stations via KiwiSDR. I was interested in all the noise (pulses, beeps, tones) that can be heard when searching for a station to listen to. I wanted to put some of these byproducts, or nuisances, in dialog with each other to create a musical order.

1. The Perfect Storm Stephen Bradley
09:19 The Perfect Storm captures virtual shortwave radio transmissions accessed remotely from the World Wide Web. Before embarking on TPS, I explored a number of supplied listening resources, such as KiwiSDR, a SDR receiver at SDR.HU that includes numerous radio receivers from around the world. By selecting, scrolling, and clicking in the “timeline” interface, I could change the channel to jump randomly or select what appears to be the strongest or weakest signals. By lengthening the selection area, I could listen to a narrowly focused frequency that increased the radio noise. This expands and increases our methods of listening to shortwave radio.

2. Over the Horizon Pietro Bonanno
08:59 Over the Horizon is an electronic composition based on sampling, treatment and interaction of multiple sound sources recorded among short-wave frequencies between 2 and 30 MHz.The idea behind the composition is to create a dialogue between technical frequencies (OTHR, R2DBI and CODAR) and broadcating (BSKSA Holy Quran, Radio Saudi) to investigate the distance from a geographical and cultural point of view. So Ocean Radars and the voice of the Arab Singer serve as imaginary circumference of a center in which is placed the listener, from anywhere in the world he comes from. The materials—recorded by WebSDR dell’Univesrità of Twente (NL)—were treated with CSound through techniques related to the modulations used in the radio (AM) and granulation. The constant rate of the OTHR is the primary component in the broader rhythm of the composition, hence the title.

3. Strange Sonars Linda Dusman & Alan Wonneberger
09:59 Strange Sonars (2017) is a collaborative work designed to incorporate into its sonic palette during broadcast the natural sounds and characteristics of shortwave transmission. As sonar is used underwater to detect potential dangers, Strange Sonars pulses slowly through the air of organ pipes against a sonic backdrop of presidential oaths of office—voices of men granted via democratic elections extraordinary potential for good or evil. Mixed especially for shortwave using a single cone speaker, these presidential voices initially are reminiscent of a de-tuned shortwave sideband, bending in and out of the organ “sonar” blasts as a warning of potentially dangerous political waters.

5. Three Steppes Forward Two Steppes Back Jeff Gburek
08:56 My most recent research and practice have involved using the theremin in unique ways to calibrate the shortwave radio reception, scramble and coupling the theremin with walkie talkie feedback systems. I like to think of these elements as ways to study electro-magnetic polarity, transmission and receptions, with the amusing by-product of original and unpredictable sounds in a microcosm of satellites.

6. Spectres of Shortwave: Falling Towers (excerpt)Amanda Dawn Christie 06:00 Spectres of Shortwave / Ombres des ondes courtes is both a film and an electroacoustic audio documentary about the Radio Canada International Shortwave Radio Towers that transmitted from 1944 to 2012 and were demolished in 2014. The soundtrack to the film was designed so that it could stand alone as an audio work.Two years before the demolition of the RCI radio towers, home made contact microphones (both piezo disks and piezo film) were placed on the towers, halyards, and vertical stays of the transmission site. A library of recordings was made of the vibrations of the 400 foot tall radio towers in the high marsh winds. Field recordings were also made during the demolition as each of the towers fell and crashed to the ground in the midst of heavy machinery and cold winter winds. In this excerpt, you hear the “voices” (contact mic recordings) of each of the towers. As each tower falls and crashes to the ground, it’s “voice” (contact mic recording) is first briefly amplified in a final breath, before it is removed from the mix altogether.