Catch the snow art before it snows again

[caption id="" align="alignleft" width="300" caption="Artist Sonja Hinrichsen worked in snowshoes to create a snow art work at the Columbia Land Conservancy's Ooms Conservation Area at Sutherland Pond in Chatham this past weekend. See it before it snows again tomorrow!"] 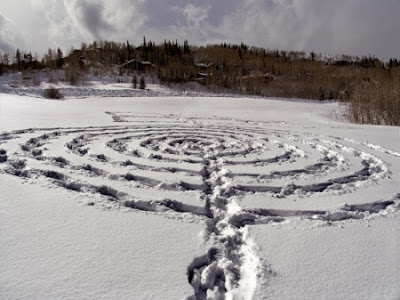 [/caption]Snow artist Sonja Hinrichsen, a Millay Colony alumna who is working with various organizations around the area making snow art this winter, worked with local residents and other artists this past weekend to turn the frozen and snow-covered pond at Ooms Conservation Area into a snow painting, a process she has also undergone in the Berkshires of nearby Massachusetts in recent weeks.

Hinrichsen, originally from Germany, moved to San Francisco to get her MFA degree in New Genres from the San Francisco Art Institute. After graduation, she moved back to Europe for a time, and has since been returning to Millay in Austerlitz for regular retreats. The artist has done projects all over the world, and has received numerous awards and fellowships throughout her career.
Hinrichsen started her career as a visual artist, and said she traditionally worked with video, exploring various environments, filming them for a period of time, and then turning a room, or rooms, into a fully immersive work of art about what she’d learned. Such works, she said, commonly include as many as six video recordings playing at one time, structural art based on the area she was studying, and even words or sentences written on the walls. The latter, she explained, come from the short stories — almost like journal entries — she writes when beginning a new piece of art.

“What I do is explore environments,” she said in a Register-Star story on January 17, adding that she has preferred places that that were not so hospitable, such as deserts or remote mountain regions. “I like places that are a little bit difficult, places that have given people problems, but where natives have always found a way to cope.”

Intricate interconnected circles and lines now cross the pond, some of which were predesigned by Hinrichsen, while others were the work of impromptu groups of snowshoers or hikers who saw the work and began to imitate the design.

For more on the Ooms Conservation area in Chatham, visit the Columbia Land Conservancy site here...