Siobhan (Shea-vahn) Barton reported in the Register Star the historic V&O Press Company building located on Route 66 in Greenport is expected to be torn down in the coming weeks. The structure formerly housed a factory that manufactured and sold metal presses. It was built in 1923. Town building inspector Jim Florio told the paper the tear-down will be completed within two weeks. The building is being demolished to make way for the muti-million dollar development project, Greenport Crossings. The site will house a bowling alley, entertainment center and hotel.

Ariel Zangla reported in The Daily Freeman on efforts underway to replace the Greene County jail. The building, located on Bridge St. in Catskill, was built in 1908 and is not in compliance with today's standards. The jail currently houses approximately 80 people. The state Commission of Correction is allowing the county to operate the jail while a 13-member task force works on ways to build a new facility. That task force is headed by Legislator William Lawrence and has so far visited other jails. The group has already decided it wants to incorporate pod housing in any new design. The task force will make a presentation to the county Legislature next year. Editor's note: William Lawrence is a WGXC programmer. 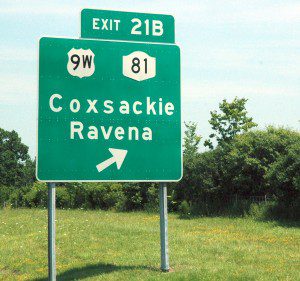 Melanie Lekocevic reported in The Daily Mail the Coxsackie Town Council had its first look at the town's 2015 budget at a public hearing last week. The $2.1 million spending plan includes a tax increase of 1.8 percent, which is below the state mandated tax cap. The proposed budget represents an increase in spending of more than $36,000 over the current year. Budget Officer Dan Westfall told the Council the increase was due to hikes in workers' compensation coverage, attorneys' fees and salaries. The budget includes a two percent salary increase for all town employees, including elected officials. The Council must act on the budget proposal before Nov. 20.