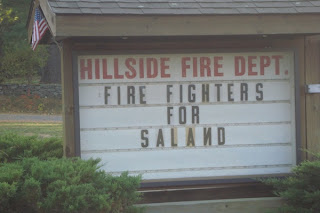 Steve Saland hit with ethics complaint over pressuring firefighters to promote re-election
The Daily News, Celeste Kaz broke the story Friday that, according to charges by a Dutchess County fireman and the Hudson city Democratic Chairman, filed a Legislative Ethics Complaint against incumbent GOP State Sen. Steve Saland, who is running for re-election in the 41st Senate District against Democrat Didi Barrett. The complaint alleges local fire authorities promoted Saland's re-election bid on firehouse signs because Saland continues to win grants for local firehouses. Firefighter Lloyd Hamilton and Hudson Democratic chair Victor Mendolia (who is working on hosting a show on WGXC) have a letter dated Oct. 11 to prove it. In the Mid-Hudson News, Saland is quoted responding, “The charge that I would ever threaten any fire chief, of for that matter, any local official, is preposterous,” he wrote. “In the case of this particular complaint, it is an outrageous lie. In fact, I challenge these two Democrats to find a single fire chief who will testify under oath that I did that.”

Area campaigns flush with cash
The Daily Mail, Colin DeVries trawled www.elections.state.ny.us and discovered combined spending among Greene County Democratic and Republican committees is will exceed $115,000 this year, with Democrats spending $51,400 with around $18,000 in remaining contributions at 111 days before the election. Republicans have spent $39,800, with $4,400 remaining. DeVries writes, "Out of the Republicans who donated to the committee, itemized donors include Coxsackie Transportation ($450), Athens Generating ($250) and Peckham Industries ($680),' and "Democratic county committee contributors include many small donations from private donors and small business, including Kaplan Law Firm ($100), Mooney’s Auction Service ($75) and Village Market in Tannersville ($75)." And what surely will be an election night question about what flavor, Catskill Town Justice Peter Margolius listed “candy bars” as a campaign expense.

Gillibrand puts her house on the market
WNYT reports U.S. Sen. Kirsten Gillibrand has put her Columbia County house up for sale for almost $1.5 million. A spokesperson for the senator told the television station they want to move closer to Albany where she grew up and has family. It means Gillibrand will not be seen as often at the Hudson Amtrak station, as Columbia County no longer has its own United States Senator.