[caption id="" align="alignleft" width="200" caption="Claverack Creek at Stottville, as seen in an image from upstateearth.com"] 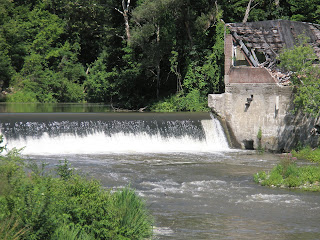 [/caption]Mike McCagg in CCScoop has a piece up about how a proposal to construct a power plant on Claverack Creek in the town of Stockport has resurfaced after the developer put the brakes on the thing last year. The project consists of using the existing 16-foot-high, 170-foot-long Stottville Mill Dam, located under County Route 20/Atlantic Avenue where the road crosses the Claverack Creek, and the existing 305-kilowatt turbine to produce electricity with the aid of a new 145-kilowatt turbine-generator in a new powerhouse. The plan also calls for the construction of a 13.2-kilovolt transmission line, approximately 200 feet long, from the powerhouse to a nearby main distribution line on the grid.

According to the story, Claverack Creek LLC submitted a new preliminary permit request earlier this year with the Federal Energy Regulatory Commission to study the feasibility of the proposed power plant project on County Route 20. The project was first proposed last year, but last fall William Fay, one of the principals in Claverack Creek LLC, said that his company was dropping plans for the project “because of the modest revenues that are generated from power plants at this time.” The company allowed last year’s application to expire and efforts last month to re-open that application was denied by FERC Commissioners Jon Wellinghoff, Marc Spitzer and John Norris in a decision dated January 20. Town of Stockport officials said earlier this month that they were unaware of any activities taking place with regards to the project. According to the Federal Register, a 60-day comment period on the permit request started February 11, with comments being accepted by FERC at the following address: Kimberly D. Bose, Secretary, Federal Energy Regulatory Commission, 888 First Street, NE., Washington.
Columbia County Stockport hydroelectric Claverack Creek electrical plant FERC
Tweets by WGXC