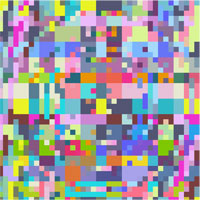 Keith Obadike, "SEMACHINES III (buttplug)"
Sexmachines is a sonic triptych by Keith Obadike for Nam June Paik and James Brown. Each module is created from the sounds of one sextoy.

Joshua Fried, "They Call Him..." (excerpt)
From Welcome to the Ice Box (1997). All instruments Joshua Fried. Commissioned by Danish Radio + Sound/Gallery Copenhagen.
“They call him...” is structured as a passacaglia or set of variations of increasing density. All the rhythmic and tonal material is derived from analysis of a snippet of Adolf Hitler’s 1939 declaration of war at the Reichstag. The piece is a collision of three temporal frames of reference:
1 PATTERN: The exact rhythmic placement of the 29 syllables of Hitler’s 7.2 second speech as he spoke it, revealed finally near the end. The speech was analyzed syllable by syllable down to 1/44,100 of a second and therefore the precise rhythmic content would be impossible to convey in normal Western notation. (Each syllable was then processed by convolution with white noise and finally all were recombined in their original relationships, to be woven into the arrangement of the piece.)
2 TEMPO: The 11-beat shuffle groove (91.57 BPM)—also 7.2 seconds, to synchronize with Hitler—and corresponding subdivisions of eighth, triplet, sixteenth, etc.
3 ACCELERANDO: The 4/4 Nixon/Oswald vocal line, always changing by means of time-expansion and compression, thus always in new relationship with the 7.2 sec grid.
“They call him...” is framed by an introduction and coda based on familiar samples; iconic and recognizable, these are images which, in the words of the artist David Salle, “understand us.” Lee Harvey Oswald: “Awwww.....!��� Ike Pappas, ABC News: “Oswald has been shot.” Richard Nixon: “Well, I’m not a crook.” Adolf Hitler: “Meine Friedensliebe und meine endlose Langmut soll man nicht mit Schwœche oder gar mit Feigheit verwechseln!” “Do not mistake my peace-loving and my endless patience for weakness or even cowardice.”

Matt Mikas, "As Oracles Across Frequencies"
A sampled-based journey through radio space using vinyl recordings as a guide. Through the psychological architecture of repitition and cut-up techniques, an attempt at the divination of social zeitgeist is presented in strange musical form.