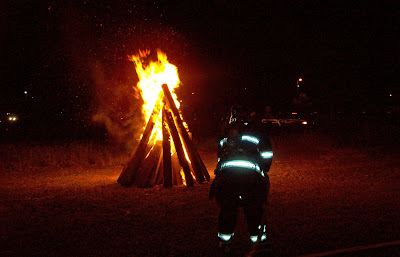 [/caption]
Several WGXC staff and volunteers were at the goodbye party for Patrick Doyle and Catherine Smith, the owners of Basilica Industria (the site of a WGXC fundraiser last New Year's Eve), Saturday night, when the following happened, reported by Carole Osterink in The Gossips of Rivertown:

The group then gathered in the courtyard north of the building for a bonfire--a feature of so many events at Basilica Industria over the years. No sooner was the bonfire ignited than the Basilica was descended upon by City of Hudson Fire Police, the Fire Chief, and Engine 30 from the Hoysradt Fire Station on Warren Street. The firefighters extinguished the bonfire. It wasn't immediately clear to the spectators that the presence of the Fire Department wasn't part of the theater of the evening, but it became clear when Doyle was issued a citation. Doyle had contacted the Fire Department to arrange for a permit for the bonfire, but he was unable to reach anyone and his calls were not returned, so he decided to go ahead with the bonfire anyway. Doyle is scheduled to appear in court on September 8.

[/caption]
Saturday night in Hudson, there were several fires and police actions, most notably a large fire at 518 Columbia St. a few moments after the Basilica incident, that, according to the Register-Star and ColumbiaPage reporting and photos (at left) and this reporter's eyes, called or alerted Hudson Fire Department, Hudson Police, the Greenport Rescue Squad and the Greenport and Catskill Fire Departments from shortly after 11 p.m. to 3 a.m. Doyle was a political activist in Hudson for the past ten years. New Basilica owners Nancy Barber and Bill Stone watched the ceremonial fire extinguishing in person.
Greenport Hudson Catskill close calls
Tweets by WGXC