Throughout the night, Catera was sampling and "deC...

Teach (In))): The Kitchen with students from Liberty Hight and Humanities Prep: Apr 23, 2004

Five Concerts All at Once, And It's Quiet by Jon P... 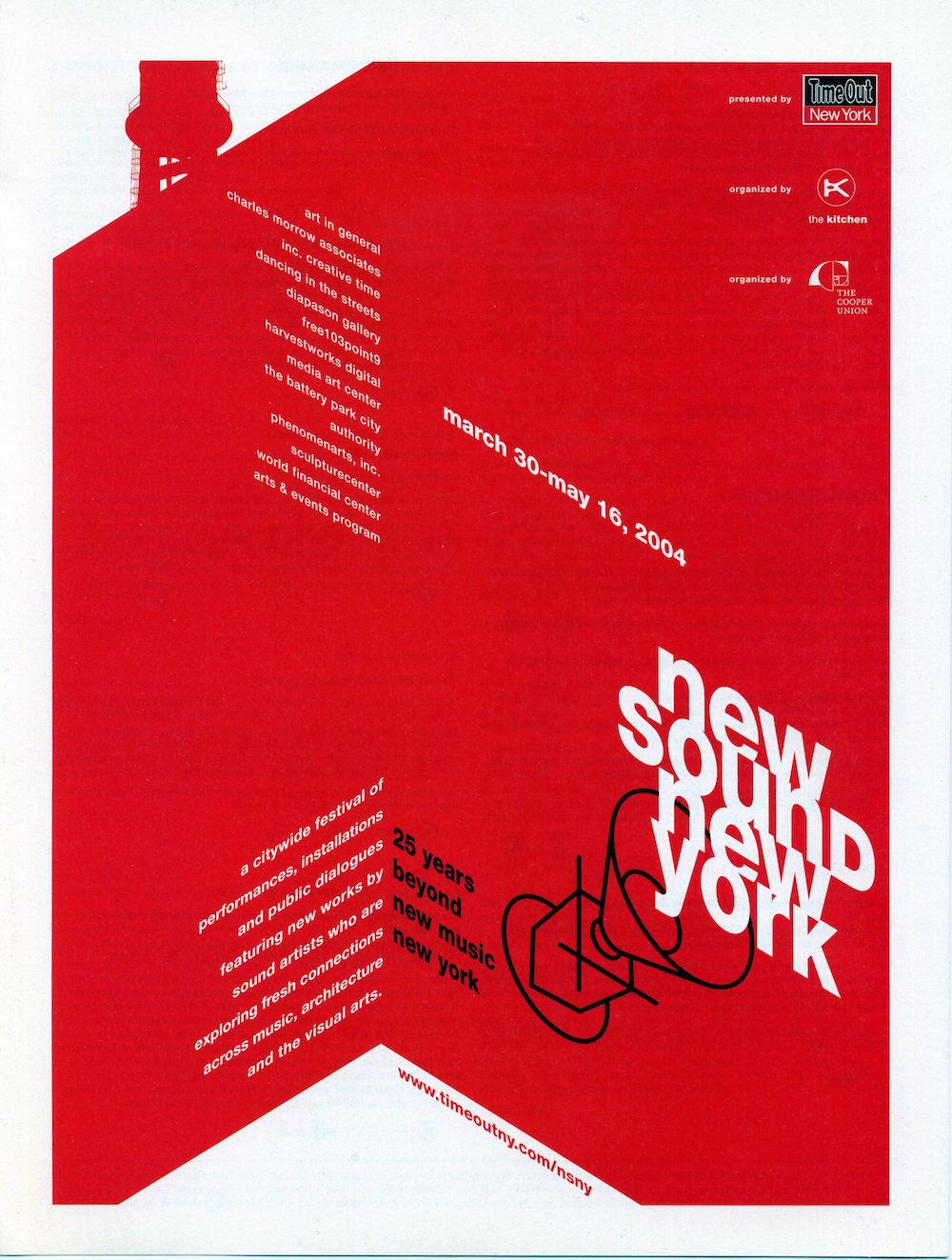 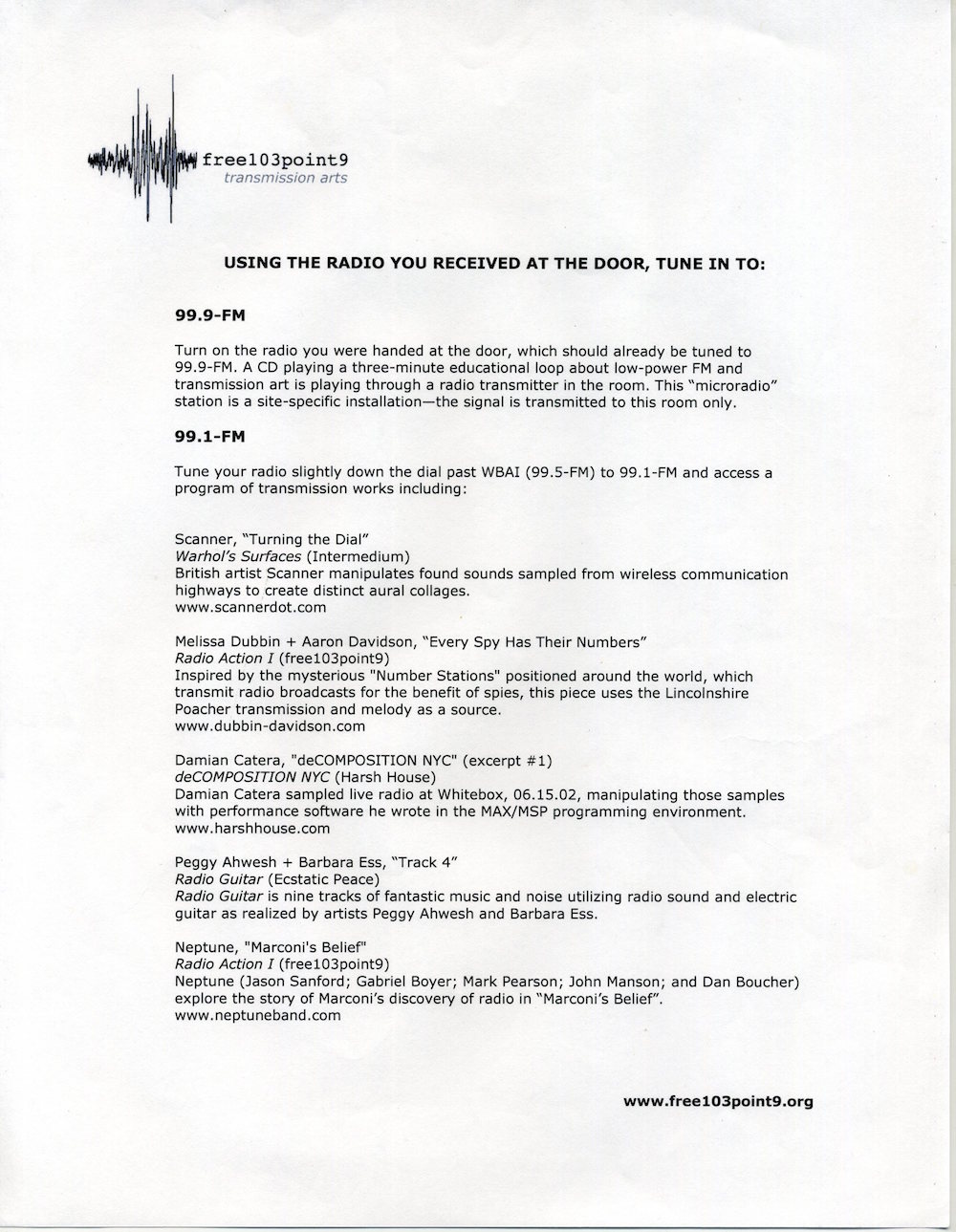 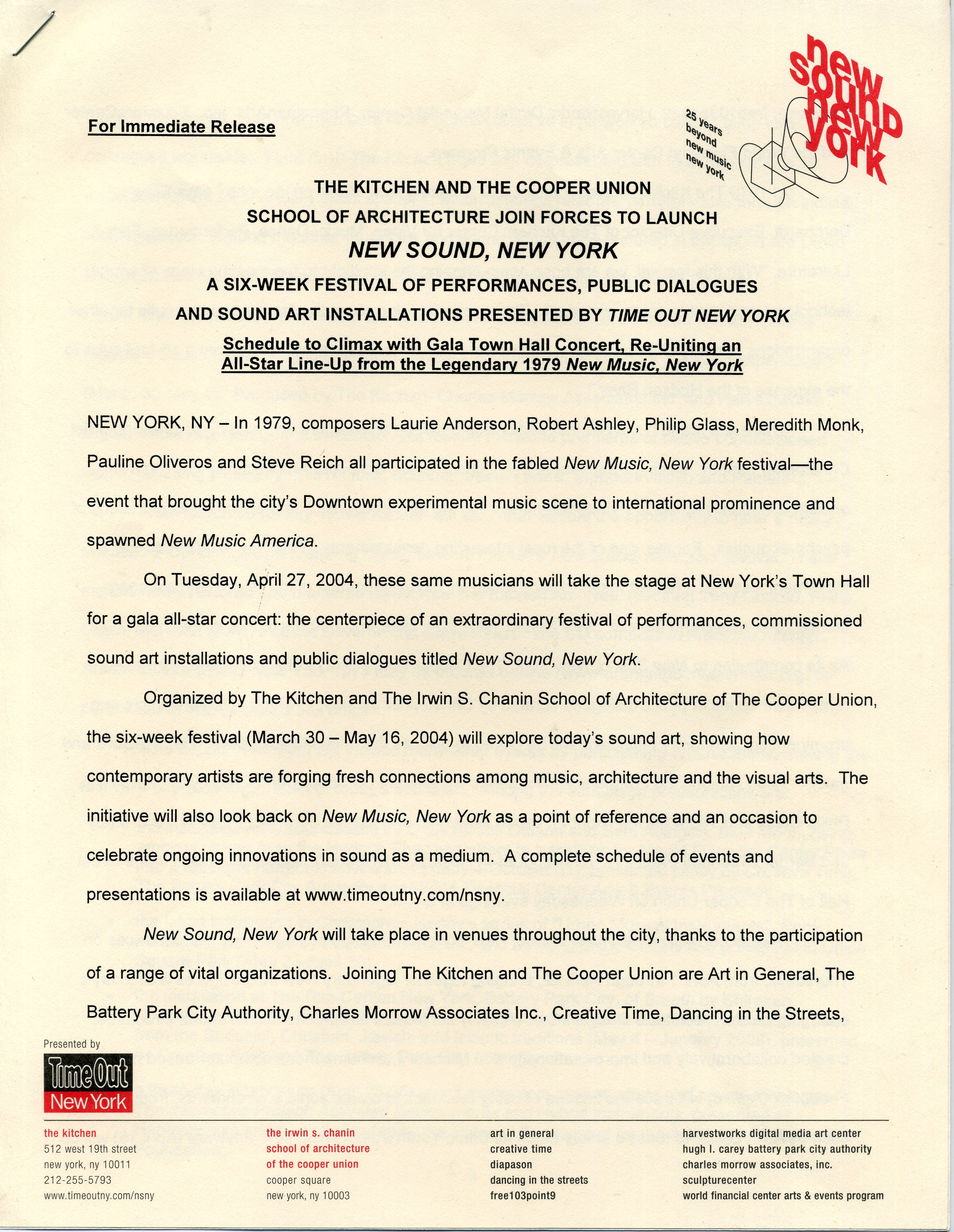 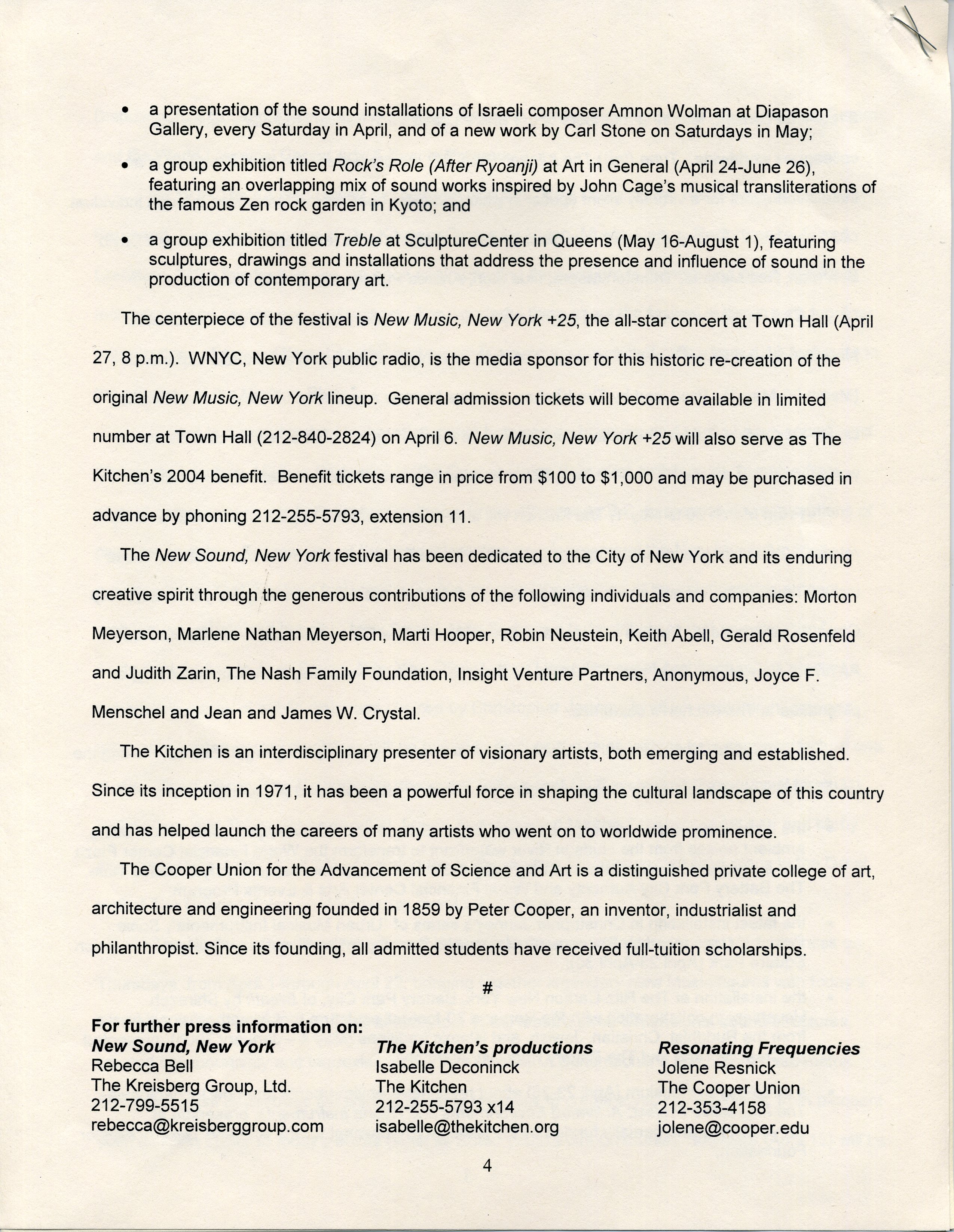 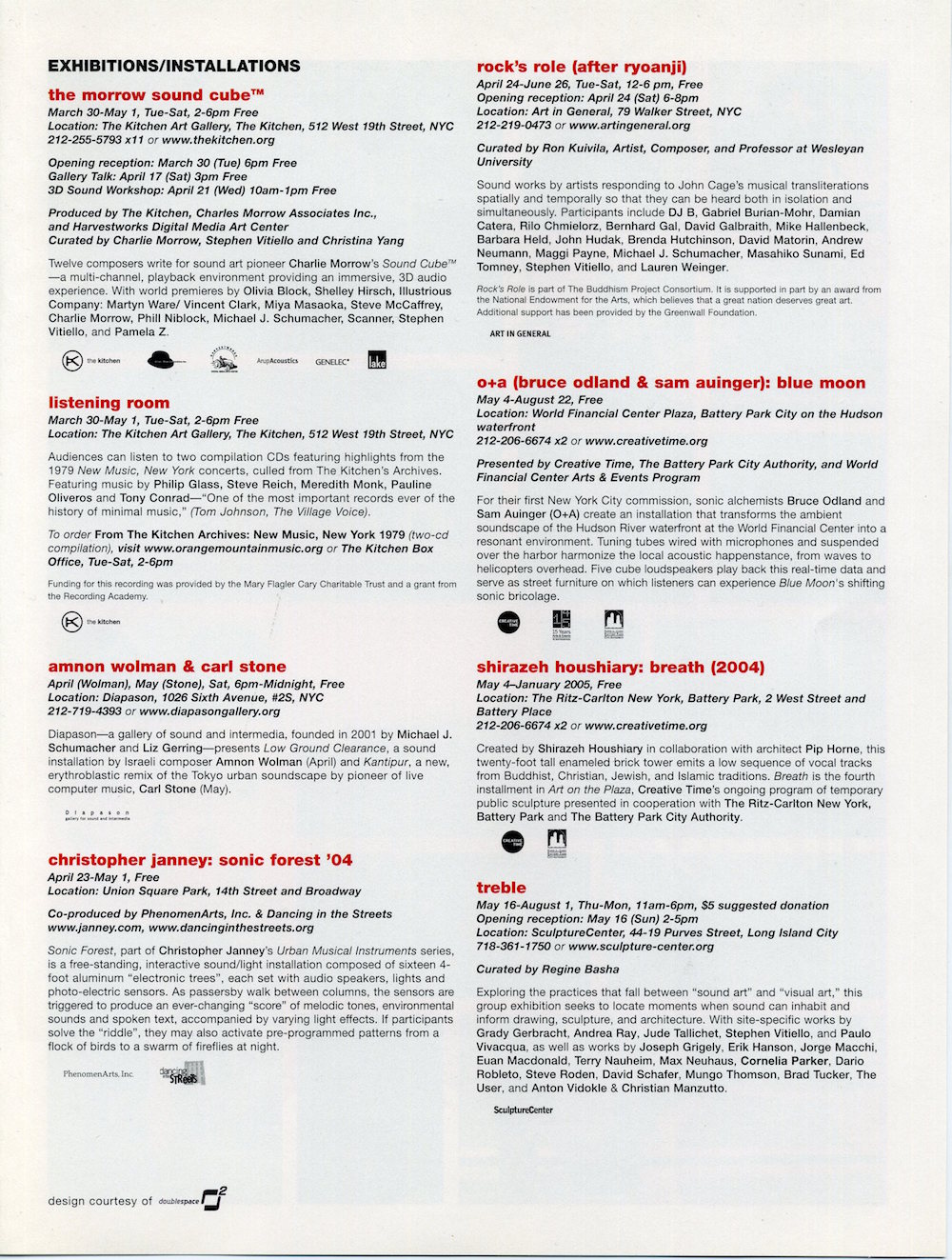 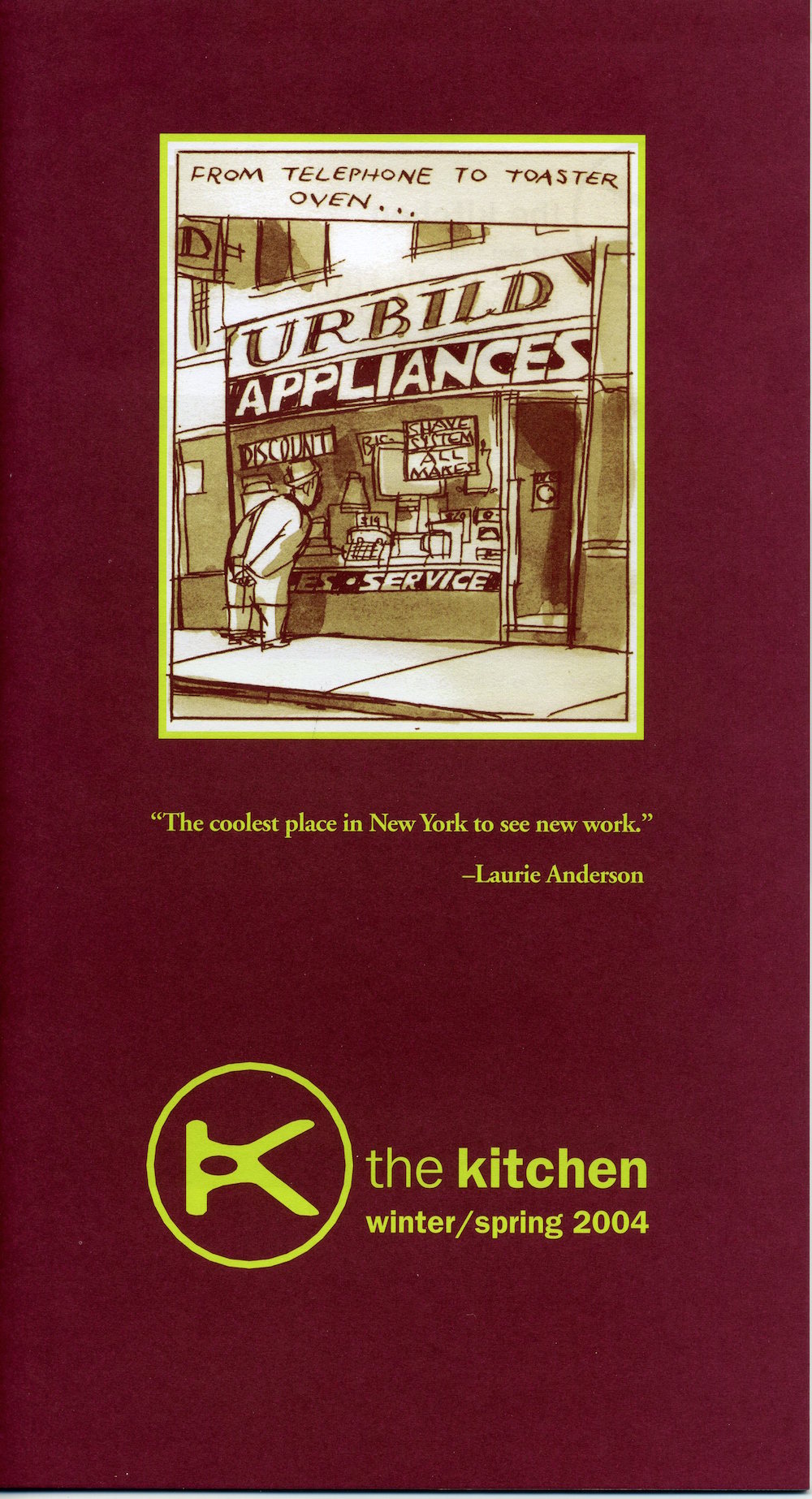 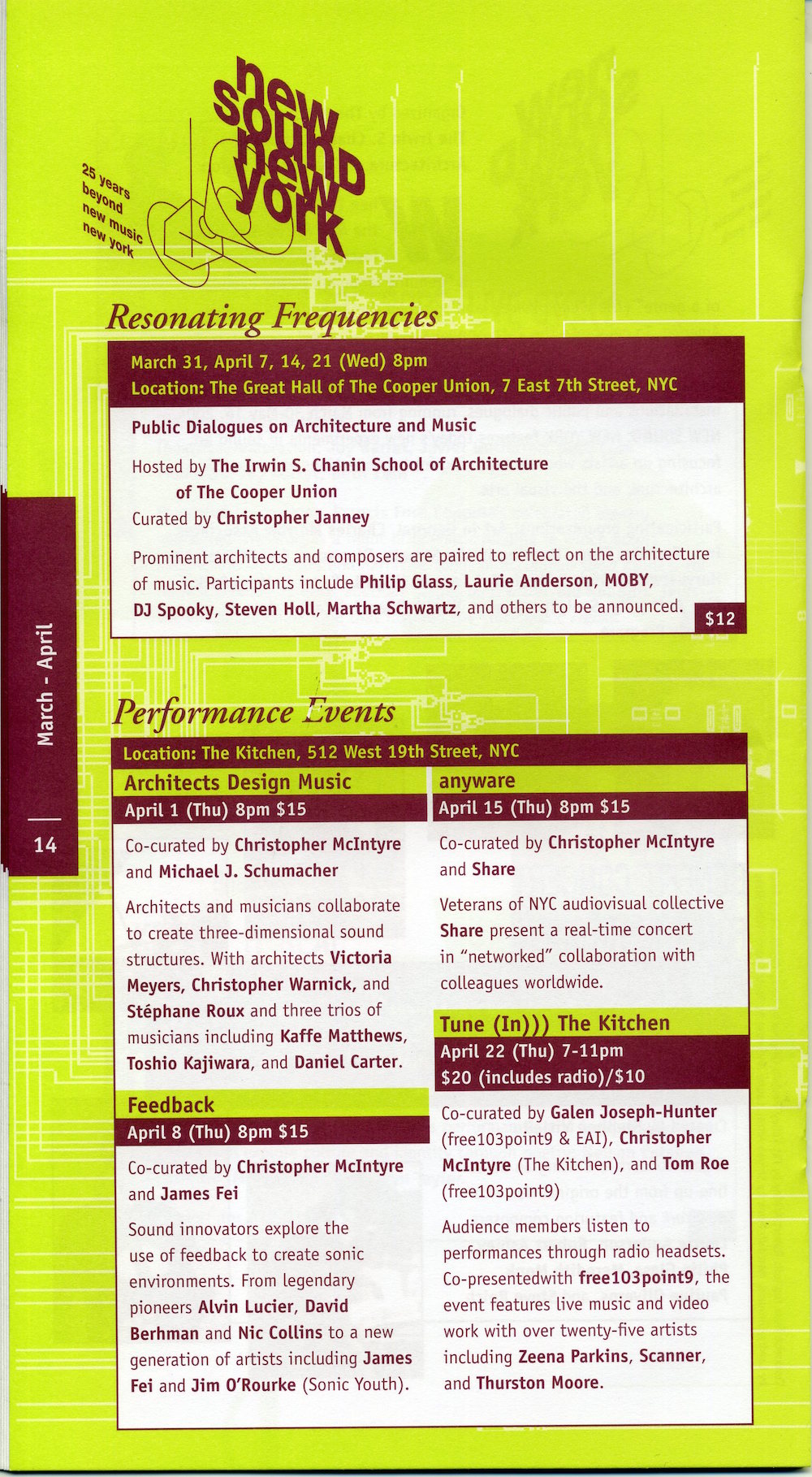 free103point9's Tune(In))) traveled to The Kitchen as part of the city-wide festival New Sound/New York. Over 30 artists performed into five transmitters. Attendees listed to performances on radios with headphones.
Tune in on five frequencies:


Tune(In))) The Kitchen is part of "New Sound, New York," a city-wide festival of performances, installations and public dialogues featuring new works by sound artists who are exploring fresh connections among music, architecture, and the visual arts. Running March 30-May 16, 2004, the festival is organized by The Kitchen with The Irwin S. Chanin School of Architecture of The Cooper Union, in conjunction with ten other New York arts organizations, and is presented by Time Out New York. www.timeoutny.com/NSNY

Five Concerts All at Once, and It's Quiet
The audience at the Kitchen listened to performers on portable radios.

It was the quietest concert of the year and perhaps the noisiest.

For long stretches of the Tune(In))) the Kitchen, a four-hour electronic music gathering on Thursday night that was as conceptual as its title, the only sounds in the Kitchen came from people strolling around and sporadic conversations.

But the airwaves in the room were alive with abstract sounds. Four simultaneous performances and a channel of video soundtracks were broadcast to the FM radios and headphones of the audience. The musicians worked at tabletop setups, never knowing who was listening.

Tune(In))) was a small-scale fulfillment of many avant-garde musicians' dreams of being heard on the radio. It was also both a throwback to 1960's-style multimedia events ÷ with Nam June Paik videos from the 1960's ÷ and an embrace of the latest laptops and other gizmos.

The aesthetics looked back to the 1960's, as most of the performers offered uninterrupted, slowly evolving textural works. Performers like John King, Damian Catera, Transmaniacon MC, Tom Roe, Jeremy Novak, I-Sound and the duo of Alan Licht and Marina Rosenfeld each created distinct, dense soundscapes that could be meditative or jolting. In this context Sybarite lived up to his name by using samples of music with melodies and friendly acoustic guitars.

There were some low-tech offerings, too. Thurston Moore of Sonic Youth played a perpetual-motion electric guitar improvisation, shifting from jumpy picking to frantic strummed chords to blaring effects-pedal distortion with Carlos Giffoni applying additional electronic effects. Mr. Giffoni also played his own electronic set. At one point he looped someone saying "Repetition breeds suggestibility" followed by a new loop: "I am not suggestible."

In a high-tech/low-tech duo, Ikue Mori used her laptop to play quick, quiet sounds ÷ like a slapstick routine at a flea circus ÷ while Zeena Parkins added textures from crumpling, ripping, tapping items like bubble wrap and a pair of clogs. And 31 Down played a dense, throbbing piece with film noir dialogue samples while he snapped photographs, ate donuts and used a coffee cup to trigger buzzes and swoops.

In an event that couldn't help prompt thoughts about radio as audience members dialed toward the Kitchen's frequencies, Scanner had the most intellectually germane performance. He was scanning radio broadcasts for sounds to sample, adding ominous undercurrents to things like a Sibelius symphony. At the end, like Tune(In))) itself, his segment dissolved into static.
http://www.thekitchen.org/