Created by Absolute Value of Noise and Anna Friz. 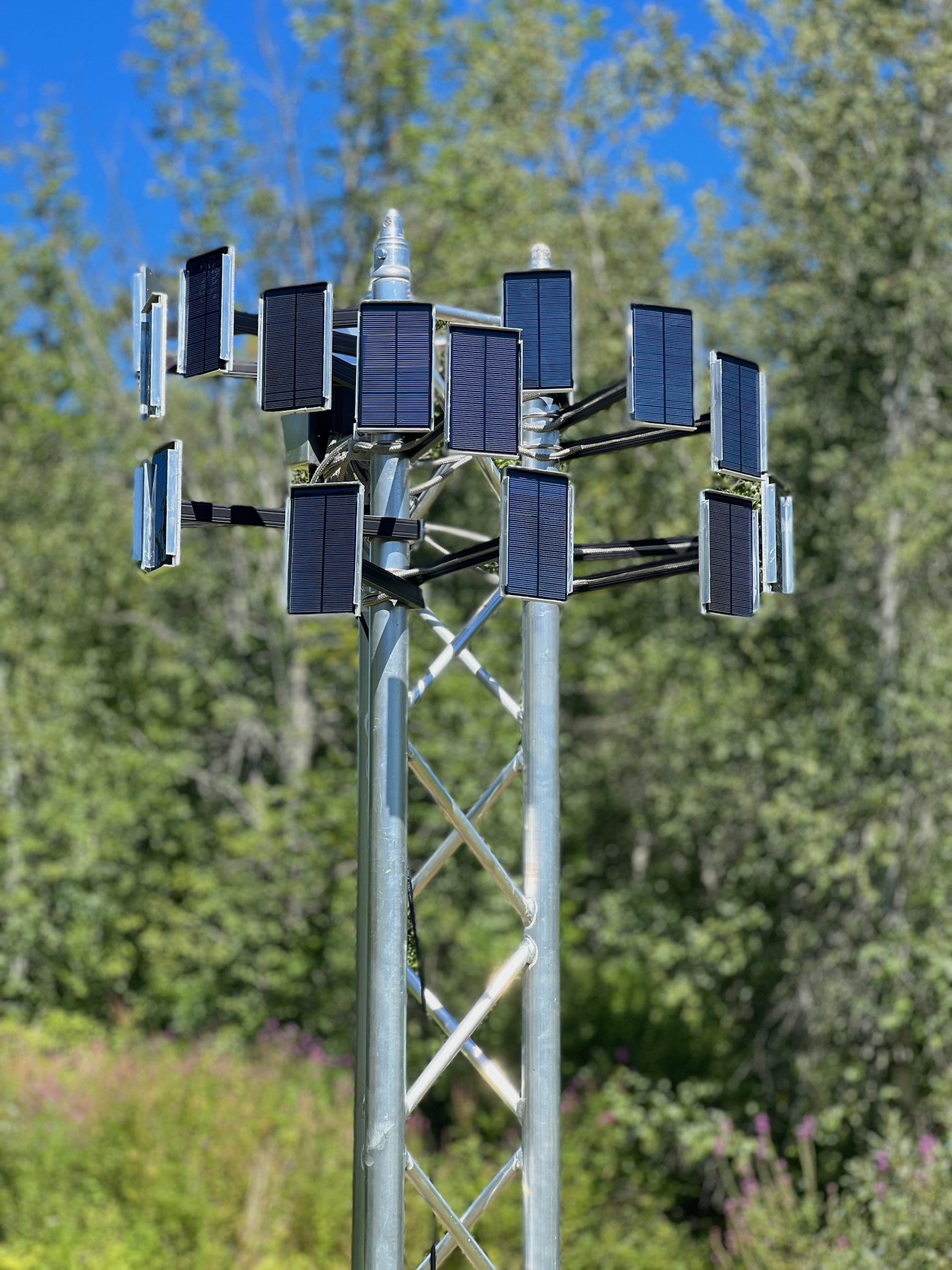 Listen Live when the sun is shining in Acra, NY: (allow a few seconds for audio to start)

Or, if the sun isn't shining, listen to this 10-minute sample recording.

Some years in the future, or perhaps in a surplus version of the present, a solar-powered artificial intelligence wakes with the sun. Its body is a small radio tower with solar cells and a modest signal. With sufficient solar intensity it powers up and responds to the environment, playing with simple AI sound synthesis algorithms in an attempt to imitate and broadcast what it senses nearby, such as insects, birds, frogs, wind, falling rain, changing weather, or magnetic phenomena. It hums and sings, perhaps accompanying a chorus of crickets or a passing bear, perhaps transmitting a memory of a bird from the recent or distant past and the song it sang then. The human culture that created this small artificial intelligence may have changed radically or may no longer exist, but it continues its sonic explorations, generating and remembering sounds, and transmitting signals to the inhabitants of its immediate animate world.

In our present, the Wave Farm realization of Solar Radio is an outdoor sound installation featuring a small artificial intelligence mounted to a short radio tower which wakes with the sun and sleeps when the light grows dim. It monitors the seasons and the amount of energy available to it through its solar cells, generating an evolving composition in response to environmental conditions. Listeners may access Solar Radio at wavefarm.org/listen and will also encounter it woven into Wave Farm’s terrestrial radio transmission, WGXC 90.7-FM.

The AI is keenly aware of the state of its energy source - the electronics know when the solar panel is in full sun or in the shade, or blocked by clouds. It can change its behavior, and switches its circuitry to draw out the power in different ways. The resulting generative sound reflects the mood of the AI and its perception of the outside world that changes with the cycle of seasons. Low energy waking-up audio consists of tones or tone-poems made of combinations of simple waveforms. As more energy becomes available, the AI can also better observe its fluctuations and add more complicated computed sounds into the mix when the energy levels are high enough and stable; it may also develop an earworm, or fixate on a remembered sound for a time.

Solar Radio proposes a different way of thinking about and relating to electrical power and small-scale computational systems. It moves away from the idea of power being instant and ubiquitous. Technologically, it embraces its limitations rather than combatting them within the rhythms of the environment and the sun. It also speculates on relationships between artificial intelligence and the world that could take place beyond human intention or control.