Inhaled Yowls Machine is the name of a project a... 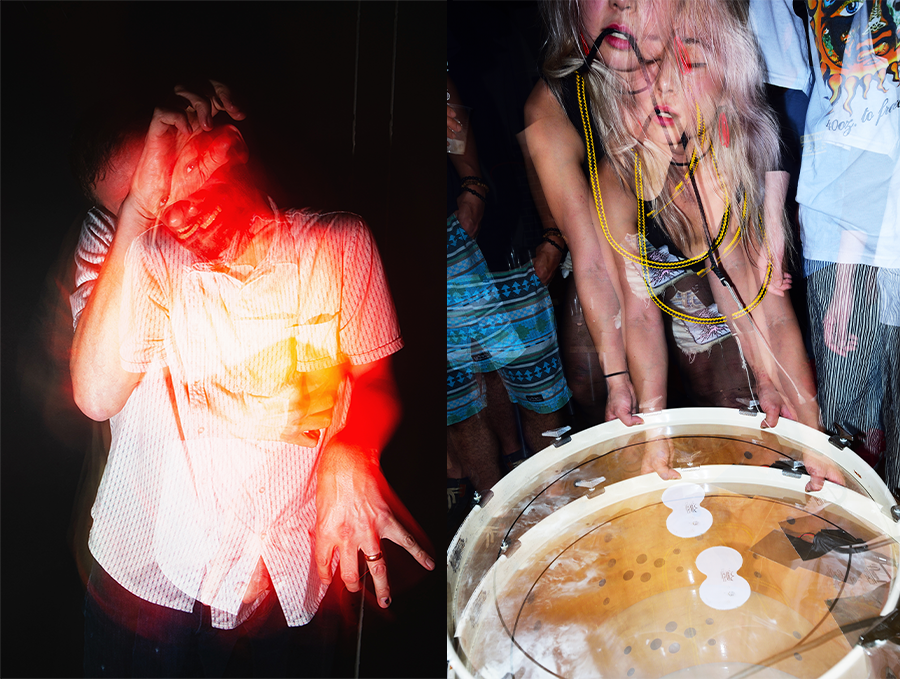 Inhaled Yowls Machine is the name of a project and novel tape instrument which will be used for composing, recording, and broadcasting during the Wave Farm Residency by the artist duo Victoria Shen and Aaron Dilloway. The instrument will consist of hacked 8-track tape players that will function like a motorized Mellotron. This novel approach to tape manipulation presents the opportunity for multichannel sound collage and a unique sounding instrument. Dilloway/Shen will use recorded samples from the local radio as the chief material for the tape compositions. These compositions will be broadcast over local radio during the course of the residency and culminate in a live performance with a quadraphonic sound configuration.

Aaron Dilloway is an improviser and performer who works with 1/4" tape loops in 8-track cartridges as well as other obsolete electronic equipment. In his performance-based practice, he manipulates magnetic tape in real-time by feeding the loops sounds from his body, everyday objects, electronic sources, prepared tapes, as well as the occasional actual instrument. Since 1994 he has run Hanson Records, a record label, mail-order service, and brick and mortar record store. In 1998 with instrument builder Nate Young he co-founded the industrial noise group Wolf Eyes, recording and touring extensively with them until leaving the band in 2005. Since then Dilloway has performed all over the world as a solo artist including gigs and residencies including Wave Farm in NY, Museion in Bolzano, INA-GRM in Paris, Istituto Svizzero in Rome, Station Museum in Houston, New Museum in NY, and countless others. Dilloway is an avid collaborator working alongside many artists and musicians including Genesis P-Orridge, Lucrecia Dalt, Victoria Shen, C. Lavender, Kim Gordon and Bill Nace. aarondilloway.bandcamp.com

Victoria Shen is a sound artist, experimental music performer, and instrument-maker based in San Francisco. Shen's sound practice is concerned with the spatiality/physicality of sound and its relationship to the human body. Her music features analog modular synthesizers, vinyl/resin records, and self-built electronics. Eschewing conventions in harmony and rhythm in favor of extreme textures and gestural tones, Shen uses what she calls "chaotic sound" to oppose signal and information, eluding traditionally embedded meaning. Her DIY approach to deconstructing the concepts of “materiality, value and mass production” both integrate and re-contextualize the formats of the readymade and assemblage techniques. For example, the album art for her debut LP, “Hair Birth,” utilizes copper to transform the cover into a loudspeaker through which the record can be played. For recent performances, she pioneered the use of Needle Nails, acrylic nails with embedded turntable styluses, which allow her to play up to 5 tracks of a record at once. Shen has performed solo across North America, Japan, Mexico, and Europe as Evicshen and as half of the duo TRIM in North America and the UK. Some notable venues in which she has performed include Boston City Hall, the Solomon R. Guggenheim Museum, ISSUE Project Room NY, DOMMUNE Tokyo, and Petreon Sculpture Park Cyprus. Shen has also been an artist in residence at Elektronmusikstudion EMS Stockholm SE, WORM Rotterdam NL, Kurimanzutto New York US, the Sound Laboratory of The Royal Danish Academy Copenhagen DK, and AUDIUM San Francisco. evicshen.com