Writes neurotransmitter, "12 Miles Out is a visual...

Selected from an open call, artists 31 Down, Paul...

As part of his ongoing series, Religious Technolo... 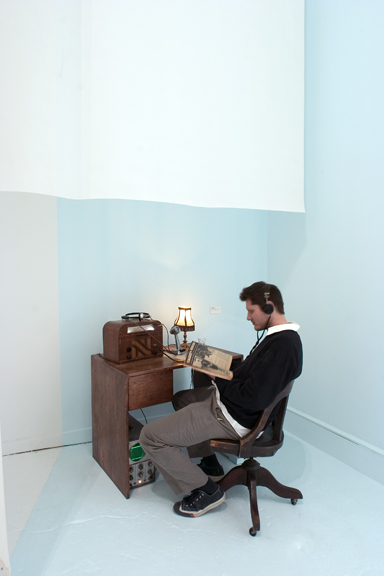 “We are awash in waves and flows, invisible electromagnetic streams carrying sounds and images, digits and codes, information of all sorts. Our ears and eyes momentarily capture these flows, as do radios, cell phones, TVs, and computers. Incorporeal as air and sea, these currents are nonetheless charted by the institutions of power, cordoned by the lines of property, subjected to the regulations of the state, and routed into the game of capital.

Airborne makes manifest these ethereal electronic currents and the interests they fuel. The participating artists imagine new forums and venues for the circulation of data and its transgressive potential, while tapping into these streams in order to divert their flows and reconfigure the social, political, and personal dynamics of electronic information." - Christoph Cox


31 Down, Wanderlost -31 Down is a Brooklyn-based theatre group that uses radio transmission to expand the traditional boundaries of the performance stage. In Wanderlost, 31 Down tackles personal privacy issues and the paranoia surrounding new technologies by eavesdropping on live police scans to search for clues in the world of the dispatcher. Employing the central motif of a 1940s-style detective radio program featuring the fictional case of missing nightclub singer Helen Tremble, Wanderlost creates a tension between fact and fiction.

Tarikh Korula, Chop 10 -Exploiting the techniques of current commercial radio practice, Chop 10 re-mixes a live, dynamic assemblage of commercial radio streams as a commentary on the current state of regulated radio. As Chop 10 moves from one Arbitron-rated Top Ten radio station in New York City to the next, the hyper “scan” makes it impossible to discern any single station’s content, resulting in a jumpy, never-ending parody of commercial radio.

LoVid, Ether Ferry -LoVid (Tali Hinkis and Kyle Lapidus) is concerned with the preservation and materialization of information that is lost or ignored in mainstream media. In Ether Ferry, LoVid manipulates signal breakdowns and establishes a tactile relationship to technology. Ether Ferry features a live video feed generated by an electrical signal simultaneously broadcast between multiple video transmitters and receivers. The change in the relative locations of the transmitters and receivers affects the resulting video produced by the system.

neuroTransmitter, 12 Miles Out -12 Miles Out is a new work by the collaborative group neuroTransmitter, who make creative use of low-power radio broadcasts. In 12 Miles Out, neuroTransmitter explores offshore pirate radio— particularly the notorious Radio Caroline—that originated from a fleet of radio ships transmitting off the European coast from 1964 until 1990 in defiance of international broadcasting regulations. An “antenna-drawing” of a ship attached to a radio transmitter sets the scene for the radio broadcast in 12 Miles Out. The audio component mixes ambient sound recordings of an ocean voyage, archival material from Radio Caroline broadcasts, and audio that references the shift in oceanic territorial boundaries as related to sovereign and global economic interests.

Mendi + Keith Obadike , 4-1-9 or You Can’t Watch A Masquerade by Standing in One Place 4-1-9 references an e-mail based money transfer scam, commonly believed to originate from Nigeria. Drawn to the structurally identical narratives of these unsolicited e-mails— that convey various African tragedies in less than five hundred words—conceptual artists Mendi and Keith Obadike present a work that incorporates text-generated sound, a video game, and net.art. Displayed in the form of an ATM machine, the work explores the structure of tragedy, archetypal African identities on the web, and the notion of scams. 4-1-9 invites audiences to engage with the project by choosing from a menu of transactions: “statement,” “withdrawal,” “deposit,” and “balance.” Participants can, for example, choose to listen to elements common to each letter, such as apologies and no-risk guarantees, and customize their own 4-1-9 letter by selecting narrative elements of their choice.

Damian Catera, Joshua Fried, and Gregory Whitehead present performances that mix, manipulate, and respond to conventional content broadcast on the radio. These performances will be broadcast live on free103point9 Online Radio at www.free103point9.org.

Airborne was organized by Anne Barlow and Defne Ayas in collaboration with Wave Farm (formerly known as free103point9), a non-profit media arts organization focused on establishing and cultivating the genre of Transmission Arts by promoting artists who explore ideas around transmission as a medium for creative expression. The museum’s Transmission series profiles artists and scholars working with transmission in the areas of new media, sound, generative audio, and an array of broadcast media.

Support for free103point9's Performance/Exhibition/Transmission Series is provided by the Electronic Media and Film Program of the New York State Council on the Arts and Meet The Composer's JPMorganChase Regrant Program for Small Ensembles.