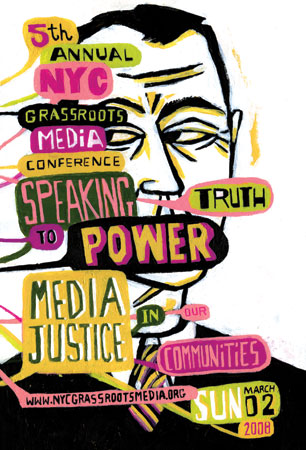 Participate in one of the most exciting, local, grassroots media and activism events in New York City! We invite you to join us at the 2008 NYC Grassroots Media Conference as we seek to define our understanding of and relationship to Media Justice as a community and explore how we can not only envision an ideal world, but to make this vision a reality. In addition to a full day of workshops and panels, there will be a full day film festival, exhibition room featuring displays by local organizations, and tons of networking opportunities.

free103point9 "Protest Radio" workshop will explain how free103point9 will use the open-source Asterisk software, and other streaming software, to create a radio station taking live phone calls on a toll-free number of the protests surrounding the political conventions this summer, and how it can be used at other events and shared by many media outlets. Panelists include Ryan Holsopple, who has used Asterisk in art projects, and Lee Azzarello, a software developer and system administrator who has worked with Asterisk.

free103point9 was going to live web stream video of many of these workshops and panels. But at the last minute we learned about CUNY's blanket policy against live streaming for technological reasons, which includes Hunter College. free103point9 has previously webstreamed live events with virtually every other college in New York City including Columbia University, New York University, Brooklyn College, New School, and other institutions such as Bard College, RPI, Brown University, Wesleyan, and others. We regret that our promise via e-mails, postcards, and web site listings, to live web stream many of these conference panels cannot be kept.

For the past four years, we’ve come together to explore the political dimensions of media and how it shapes our lives. By developing relationships between community and media organizations, the NYC Grassroots Media Coalition is working to re-imagine issues of access to, control of, and power over our media system. That means defining our struggle as a struggle for Media Justice. Media Justice recognizes the need for a media that comes from, and is responsive to, the people, a media that addresses systemic marginalization and discrimination and that speaks truth to power. Media Justice asserts that our communities and airwaves are more than markets, and that our relationship to the media must be more than passive consumption. Media Justice recognizes that the form of our current media system is not inevitable, but the result of an interplay of history, technology, power, and privilege. Media Justice seeks to integrate efforts to reform our media system with a social justice agenda, in order to create not just a better media, but a better world. We invite you to join us at the 2008 NYC Grassroots Media Conference as we seek to define our understanding of and relationship to Media Justice as a community, and explore how we can not only envision an ideal world, but to make this vision a reality.

free103point9 is setting up an automatic radio station for coverage of the protests surrounding the Democratic National Convention in Denver and the Republican National Convention later this summer. Anyone will be able to call into the station live from the protests (toll-free, 1-877-679-4283, and their call will go live on the air. Previous calls will be randomly repeated. All independent and major media outlets will have access to anyone interviews, news reports, and eyewitness accounts that are called in to the station. free103point9's "Protest Radio" station empowers both individual media makers, and independent groups looking to expand their political coverage. This workshop will explain the open-source Asterisk software behind this system, and how it has been used in the past and how it may be utilized in the future. It will also explain setting up an Icecast web stream, and other software necessary to set up this system. Panelists include Ryan Holsopple, the leader of the 31 Down radio theater group that used this system in their murder mystery "Canal Street Station." To participate in that murder mystery last year, people had to call in from pay phones in the Canal Street subway station to get new clues and solve the mystery. 31 Down is a free103point9 transmission artist. The second panelist is Lee Azzarello, a hacker that works with communications, open source software, sound and video. He's the most happy when he works on all of these things at once. He's also an avid cyclist, and runs free103point9's Brooklyn location at 338 Berry St. The toll-free number for people to call in this summer is 1-877-679-4283.

CBS: The Cupcake Broadcast Studio A DIY broadcast experience at the NYC Grassroots Media Conference March 2, 2008 http://cbs-fm.org http://nycgrassrootsmedia.org James Charles Daher and Timothy McNerney, with the help of free103point9's Tianna Kennedy, will be creating CBS: The Cupcake Broadcast Studio, an all-day DIY broadcast experience. It is easier than ever to take back the airwaves, come learn with us as we set up our own FM studio at the NYC Grassroots Media Conference March 2, 2008. In addition to a full day of quality programming, including talk shows and DJ sets broadcast locally on FM and everywhere over the Internet, we will be conducting micro-broadcasting demonstrations, showing you how to build a radio and transmit. There will also be a silent auction for a wearable FM transmitter built by Timothy and James. And of course, there will be tasty cupcakes. Our frequency will be announced at the conference, visit http://cbs-fm.org for more information. James is a Brooklyn based artist and creator of interactive objects, games and experiences with a diverse background bridging graphic design, sculpture and physical computing. He received his BFA with honors from the School of Visual Arts, Graphic Design Program, and currently a masters’ candidate at NYU Tisch’s Interactive Telecommunications Program (ITP). daher.james@gmail.com - http://jamesdaher.com Timothy McNerney is an artist interested in finding ways in which technology can empower people and reverse-engineer power structures. Currently he is in the Interactive Telecommunications Program (ITP) at NYU. He loves to talk and would love to talk to you on his occasional FM talk show broadcast from his living room in Williamsburg, so drop him a line! tim@robotim.net - http://robotim.net