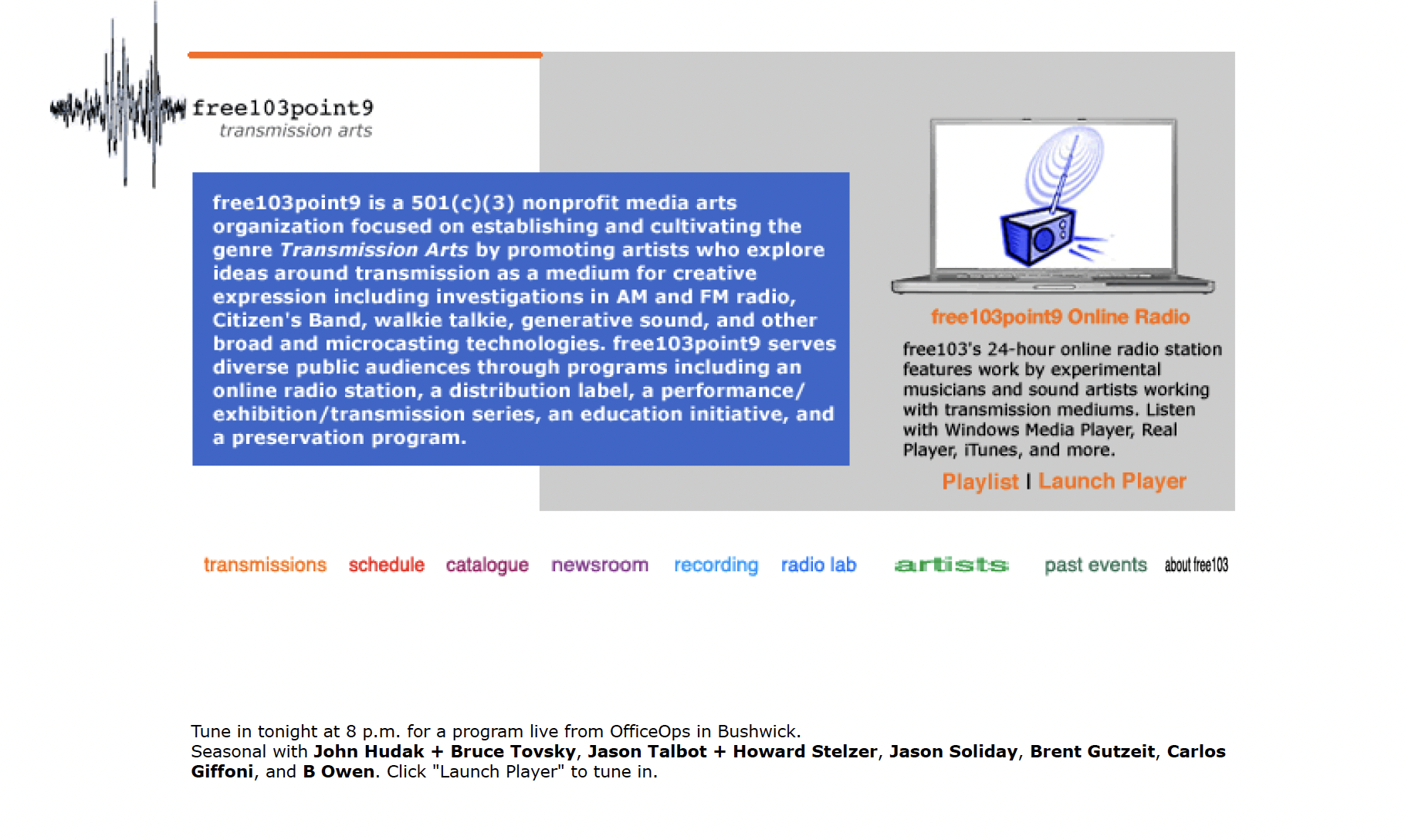 free103point9 launches its 24-hour audio stream with
a special performance this Thursday, Aug. 14 from 8 p.m.-mid

Special performance from Shawn Onsgard.
Plus DJs Matt Mikas, Tom Roe, and others.

More about the artists:

Melissa Dubbin + Aaron S. Davidson are media artists exploring the intersection of video, sound, sculpture, and installation through the creation of opto/electro/mechanical objects. Their work is informed and inspired by engineering, science (bio/robo/electro/ mechanical), architecture, and the navigation of the individual between these variables. Actively repurposing objects and protocols, they turn Braille and barcodes into music, and have used the lifecycle of parasitic wasps as inspiration for sound compositions and sculptural forms. They also create MIDI controllers/instruments for the improvisation of image and sound. It is through disregarding conventional demarcation lines between disciplines, that their hybrid devices result. Their work has been featured internationally in exhibitions, festivals, and performances.

Ashburn is a 29-year-old who moved to Brooklyn, NY one year ago from Santa Fe, NM. He has produced a number of videos, video installations and sound recordings. He has a background in film, video, audio and electronics. Primarily, he is interested in the Structualist films of the late 1960's and early 1970's and the relationships/parallels with early video art.

As a media artist, Shawn's work uses audio technologies to apprehend an audible understanding of the world; a sound epistemology that might inform new and meaningful life experiences. The recipient of diverse commissions, his composition, sound sculpture, and performance work has been performed and exhibited internationally and throughout the United States.

To hear a Real Audio sample of Shawn Onsgard's "A Word from the Oval Office" see: http://www.screwmusicforever.com/free103/AD12.html

More information on this show at: http://www.screwmusicforever.com/free103/schedule.html

TUNE IN or TURN OUT Saturday night.

Streamed on free103point9 Online Radio. Click on www.free103point9.org at 9 p.m. EDT to listen.

free103point9 Online Radio is now on the air.

free103point9 Online Radio is available around the clock. Programming includes live feeds of free103 performances and events, special guest segments, and selections from free103's archives since 1997.

Tune in this week for previous free103 performances + live shows from:

In July 2002, the commission fined Rev. Yvon Louis of Calvary Tabernacle for repeatedly airing unlicensed broadcasts at 93.7 MHz, 88.1 MHz, and 90.1 MHz in Brooklyn throughout late 2001 despite repeated warnings from the FCC. Rev. Louis responded to the FCC's Notice of Apparent Liability by asking the commission to cancel the fine, explaining that an FCC agent he invited to inspect the church did not find a transmitter during his Nov. 2001 inspection. Louis also says that he replaced the infringing one-watt transmitter with a "Part 15" transmitter, thus allowing him to air low-power FM broadcasts without the need of a license. The FCC disputed Louis' claims, noting that its field agents on numerous occasions detected signals far exceeding the permissible level for a nonlicensed FM from Calvary Tabernacle's Nostrand Ave. church. The commission also rejected Louis' argument that no operable transmitting equipment was located there. Furthermore, the FCC refused to cancel or reduce the fine, explaining that Louis continuously broadcast illegally despite repeated warnings.

free103point9 is a sponsored project of the New York Foundation for the Arts (NYFA). NYFA is a 501(c)(3), tax-exempt organization founded in 1971 to work with the arts community throughout New York State to develop and facilitate programs in all disciplines.

Contributions on behalf of free103point9 may be made payable to the New York Foundation of the Arts, and are tax-deductible to the extent allowed by law. please contact Galen Joseph-Hunter at gjh@free103point9.org for more information.