Off The Grid: Live Performances

"Mare Liberum," Benjamin Cohen, Dylan Gauthier, and Stephan von Muehlen. for Off The Grid at the Neuberger Museum of Art, Purchase, NY. (Sketch) 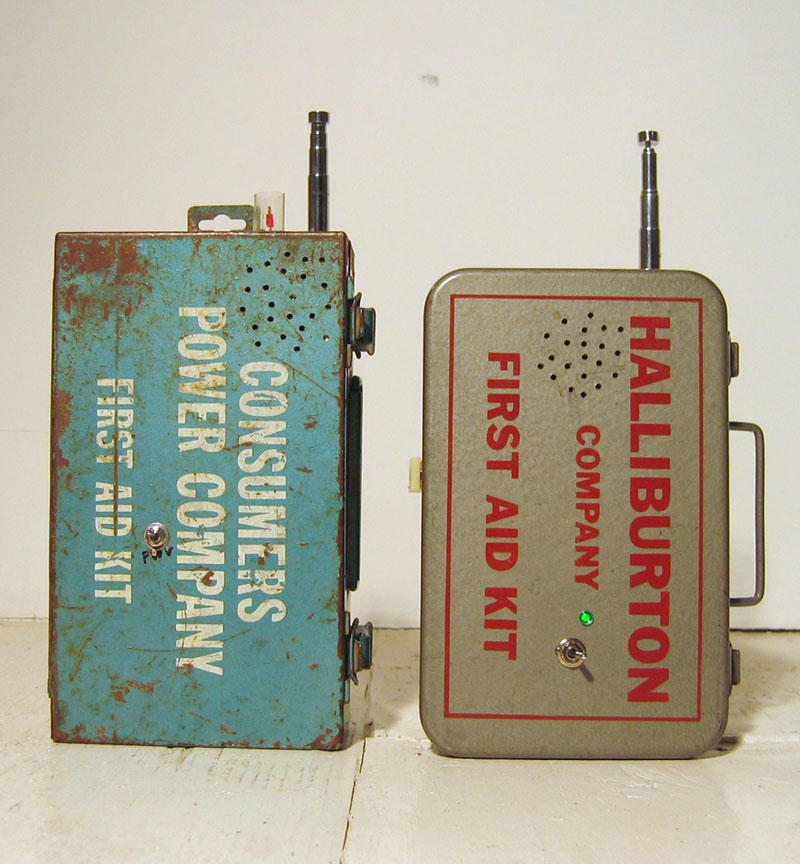 "Ambulant Transceivers: Consumer Model," Max Goldfarb. for Off The Grid at the Neuberger Museum of Art, Purchase, NY.

In conjunction with the exhibition Off The Grid, April 2 will feature a day of live performances by artists whose work subvert and circumvent conventional infrastructures.

4 p.m.: Radio 4x4 Four performers -- Joshua Fried, Matt Bua, Alexis Bhagat, and Tom Roe -- perform into four transmitters with performances transmitted to radios throughout the performance area. Audiences are encouraged to walk among the radios, "mixing" the collective and individual improvised performances. For this Radio 4x4, performers will all use battery-powered equipment, and all transmitters and radios will also not be plugged in. Brief explanation and discussion of Radio 4x4 with the artists after performance.

5:30 p.m.: Jeff Stark, Secret DinnerThe Secret Dinner project is just that. The dinners are collaborative and they happen in clandestine spaces. The first was in a grain elevator in Red Hook, Brooklyn, in 2006, and we lowered a singer into an echoey steel silo. The second was the site of the 1964 World's Fair in Queens, where we suspended an aerialist from the massive steel Unisphere. And at the third, we ate in the Freedom Tunnel, under Riverside Park in Manhattan. The Secret Dinner project was influenced by Dark Passage, a group of New York explorers, and the Suicide Club, a long defunct group of San Francisco pranksters. The project is a reaction to a culture of permission, including expensive venues, city permits, and institutional funding. It reminds participants that the most important thing is doing the thing, and that it's possible to create work that compromises only to logistics. This talk will feature gorgeous photos by Tod Seelie that document the project.

Sunrise to Sunset: Mare Liberum workshop. Mare Liberum Sunup-Sundown Build A Boat Workshop: Benjamin Cohen, Dylan Gauthier, and Stephan von Muehlen will construct a 12' Grand Banks dory over the course of a day using materials salvaged from construction sites, basic tools and old-time intuition. The artists will be available to discuss the project over pauses for lunch, afternoon tea and dinner

Earlier in the day, their will be a Kites are for Peace exhibition. Kites are For Peace and Love is a one-day social engagement with the surrounding Westchester community. It is an open invitation to come together to make and fly kites in the wind and sun, all the while keeping in mind that the same wind power that fuels a kite, can also generate our electricity. Information will be on site relating to simple and effective ways that we as individuals can make a substantial difference in the path toward environmental sustainability. In addition, there will be kite-making workshops held at the Neuberger Museum of Art leading up to the event. This event is organized by John Daquino.
http://www.neuberger.org