Pond Station transmits the hidden activity within a Wave Farm pond from dawn until sundown. As the sun warms the water each day, hydrophones (underwater microphones) reveal a slow crescendo of sound: aquatic insects “sing” to mark their territory while gas bubbles rise from the pond bottom, punctuated by unidentifiable grunts and squeaks. This poly-rhythmic chorus mixes with traces of bird-song and passing cars that filter down from above. Rain on the pond surface creates a dense cloud of high-frequency detail, like the coals in a cooling campfire. 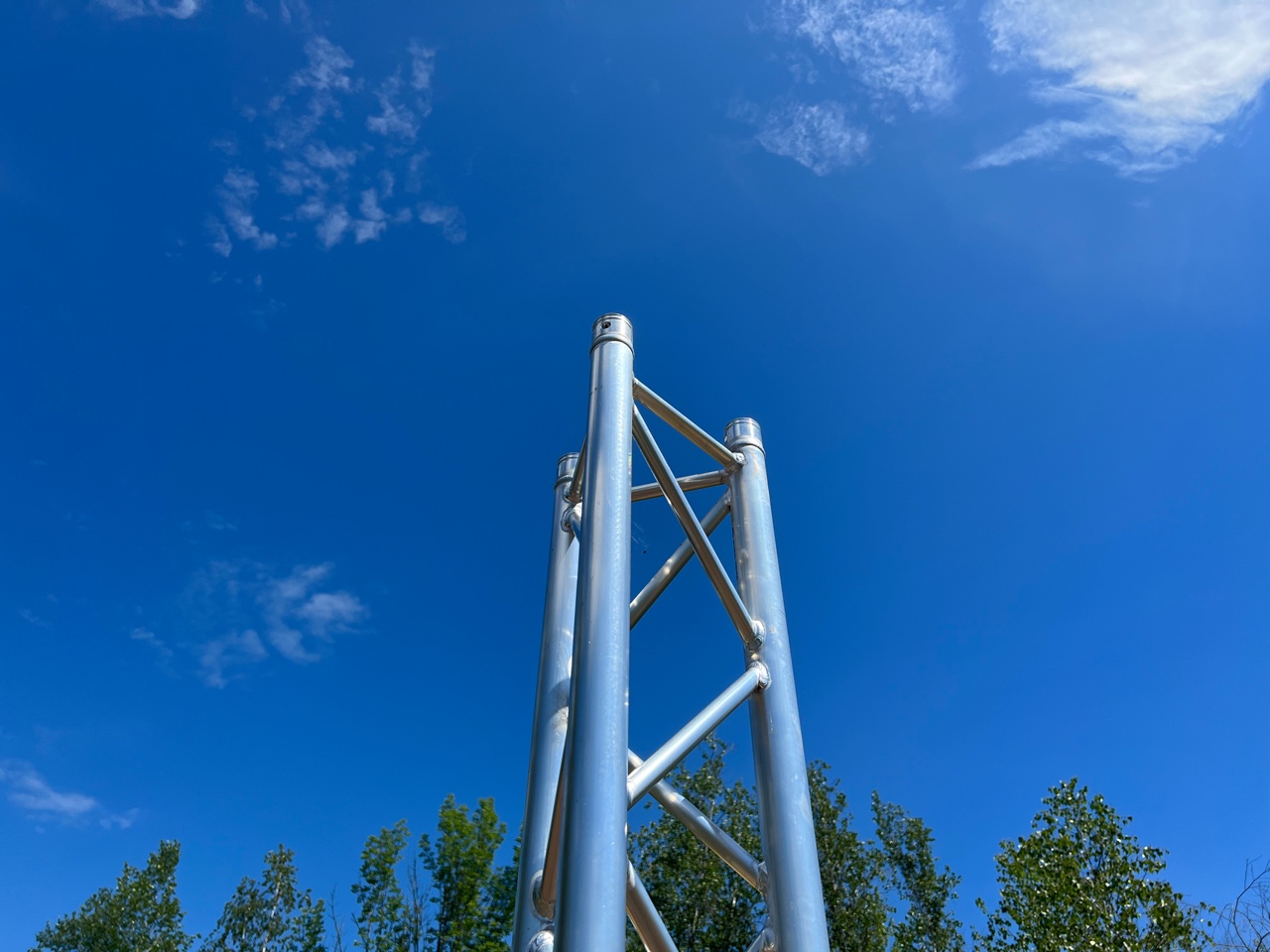 Solar Radio is an automated radio sculpture that is powered by the sun. It is a small artificial intelligence mechanism that wakes up at sunrise, mixes and broadcasts sound during the day, fades into the sunset, and goes back to sleep during the night. It watches the world through radio-based and bio-electric sensors—observing the state of the natural world and the sun.

TSAC are listening points linked to an online network of open microphones, that send live feeds to a server at Locus Sonus in Aix-Marseille where they become publicly accessible on a real-time soundmap. TSAC 1 is a stream box on the edge of woodland at Wave Farm. By placing such sites in the public domain, TSAC 1 makes local sounds, such as stridulations of insects, wind in different kinds of foliage, birds, planes, passers-by, or flows of traffic on Route 23, available to listeners for whatever purposes.

Mobile 49 (M49) is an experimental research/production facility, with two recent iterations: The Deep Cycle project, was an area-responsive mobile radio program, originating in Hudson, New York, proceeding through a set of designated locations for performance and incidents, and arriving at Wave Farm. Regenerator describes M49 installed at Wave Farm. The vehicle houses Wave Farm Radio 1620-AM, and is open to public visitors, both as a performance artifact and as an active studio environment.


The SURVANT USB Dead Drop is an open-source file repository located off of a Wave Farm forest path. Inspired by Aaron Swartz's various hacktivistic dead drop projects, Quinn's SURVANT aims to function as both an archive and a remixological tool. 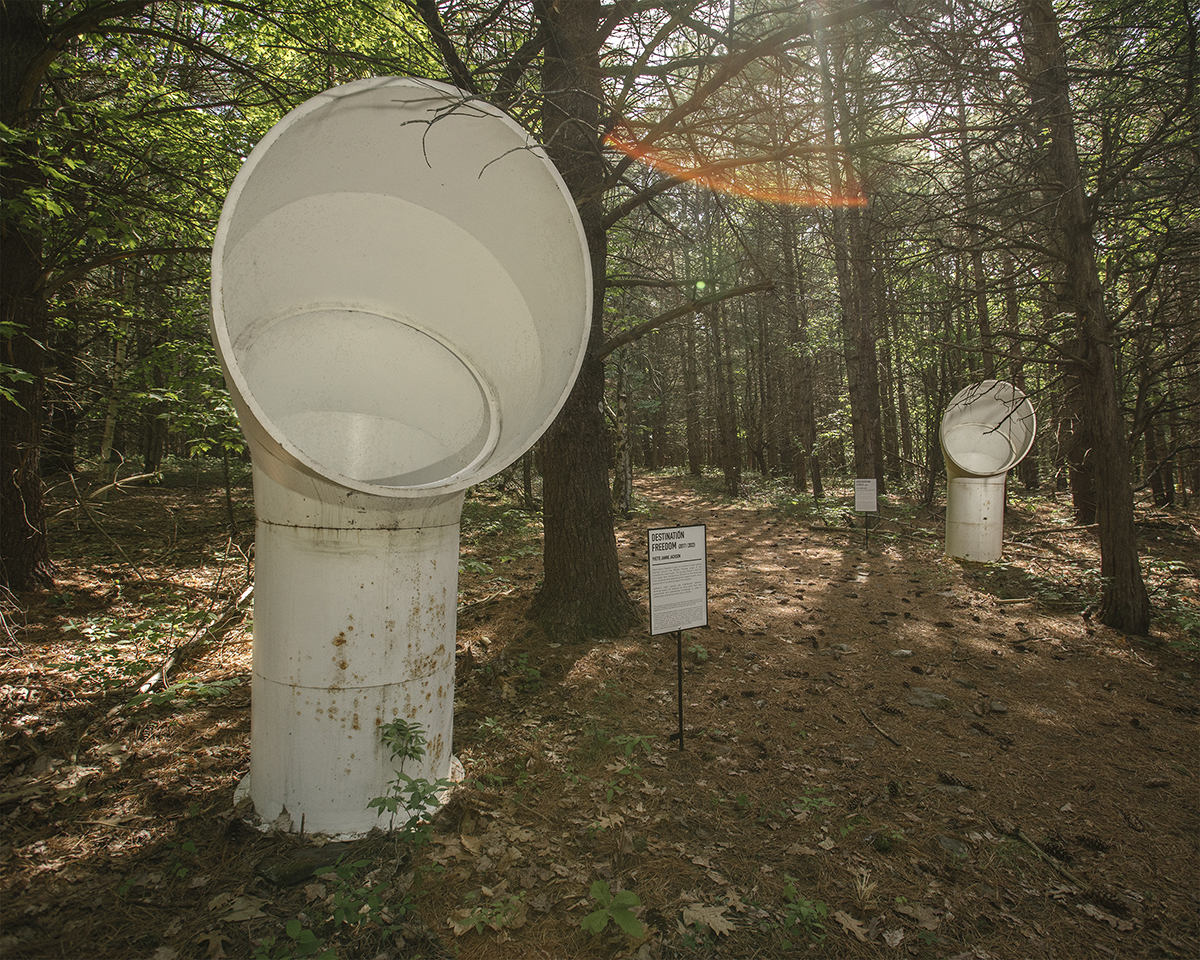 Audible as one ascends into the Wave Farm pine forest are two radio operas by Yvette Janine Jackson. The installation is titled Underground (Codes) and features a new composition created specifically for Wave Farm, which is a response, or companion, to her earlier work Destination Freedom, which is also installed on-site. Both works are amplified by Code Humpback steel projection cowls, which were donated to Wave Farm by Charles Lindsay. Writes Jackson, " The Earth-planet is the archivist of our past and future (selves) While we fight for truth(s) with soil underfoot She transmits atemporal memories to the heavens" Destination Freedom is part of a series of radio operas themed around the Middle Passage stage of the transatlantic slave trade. The journey begins in the hull of a cargo ship transporting Africans to the Americas; time collapses and expands as the vessel morphs into a spacecraft on an elusive search for freedom.

From 2012 - 2021, Remote Audio Outpost was a solar-powered recording booth installed in one of the most remote corners of the Wave Farm property and outfitted with a rotary phone for both recording and transmission. Today, Remote Audio Outpost serves as a listening space, amplifying recordings made during the project’s first decade as well as new messages left at the Boomerang phone booth. Installed at the entrance/exit of the Study Center, the Boomerang booth records personal ephemera, confessions, and salutations from visitors as they depart Wave Farm. 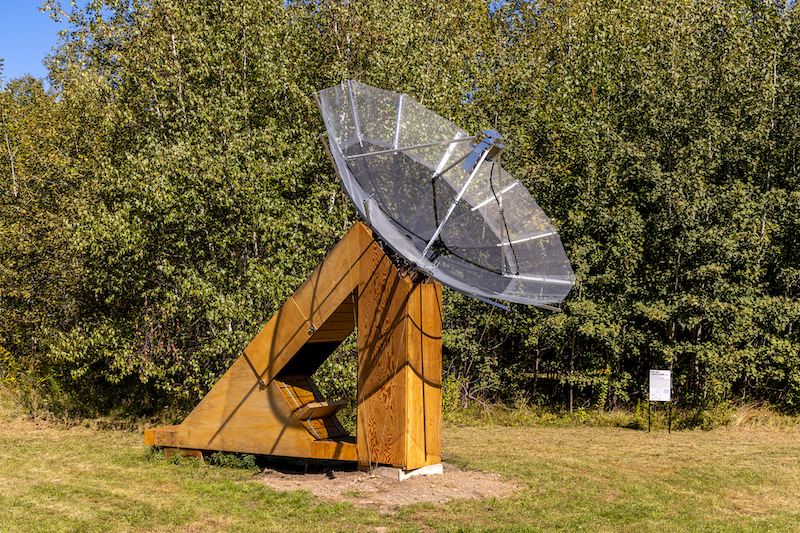 Here GOES Radiotelescope is an artist-run DIY ground station receiving GOES-16's faint, data-dense transmission. Visitors to the sculptural station sit within it and look through the “telescope” and see images of the Earth as they are being received from the satellite. A generative audio stream interprets the interaction of the sun's energies with Earth's magnetosphere. Remote visitors may access visual elements of the project at heregoesradio.com.

Following the attacks of September 11, 2001, the Jersey Barrier quickly became the ad hoc solution for low cost "hardening" of designated urban sites from attack. This simple form insinuated itself into the environment without grace or apology, affecting the ways in which the population was permitted to circulate. In contrast, Type A realized the Jersey Barrier’s potential for grace while maintaining its authority to dictate behavior. At Wave Farm, Barrier takes the shape of an audio waveform of S.O.S. 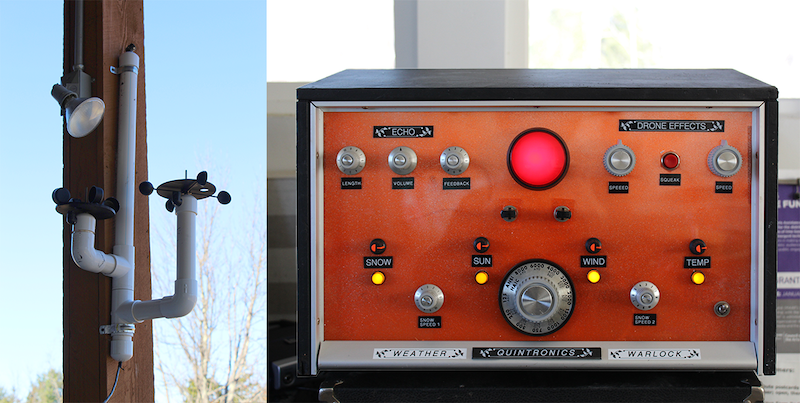 The Weather Warlock (Upstate edition) is one in a series of custom-built weather-controlled analog synthesizers. Outdoor sensors detect changes in sunlight, wind, precipitation, and temperature, with output becoming particularly dynamic during periods of rapid meteorological change, such as sunrise and sunset. At Wave Farm, Weather Warlock serves as a stand-alone installation and generative composition, an online stream, as well as an interactive instrument available to visiting artists and radio programmers.

With Traffic Saxx (ON THE 1s), Quintron continues to explore "audio mirrors" of the external world, in real-time. The project takes sounds that many consider invasive or annoying and whips them into soothing, surf-like compliance. Traffic Saxx transforms the white noise of passing tire traffic on NY 23 into a signal that can be mutated and manipulated by WGXC DJs in Acra. 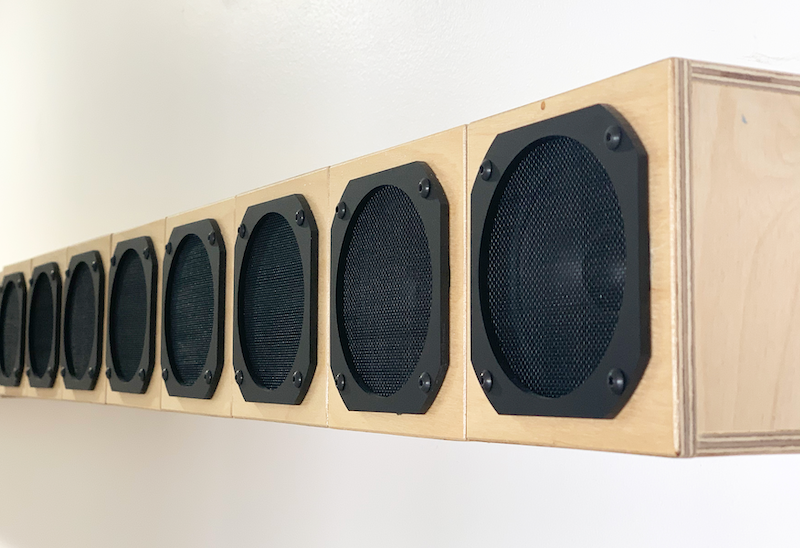 Every Radio Station is a sculptural sound installation composed of 95 hand-made radios, one for every station in the FM band. Each radio is equipped with a speaker, letting viewers experience the entire spectrum at once, walk along it, or come in close to hear an individual station. For each geographical location the piece is installed, a totally different sonic experience results, informed by the number, strength, and kind of stations broadcasting in that area. As the terrestrial radio spectrum increasingly gives way to streaming services, Every Radio Station will reflect these changes. 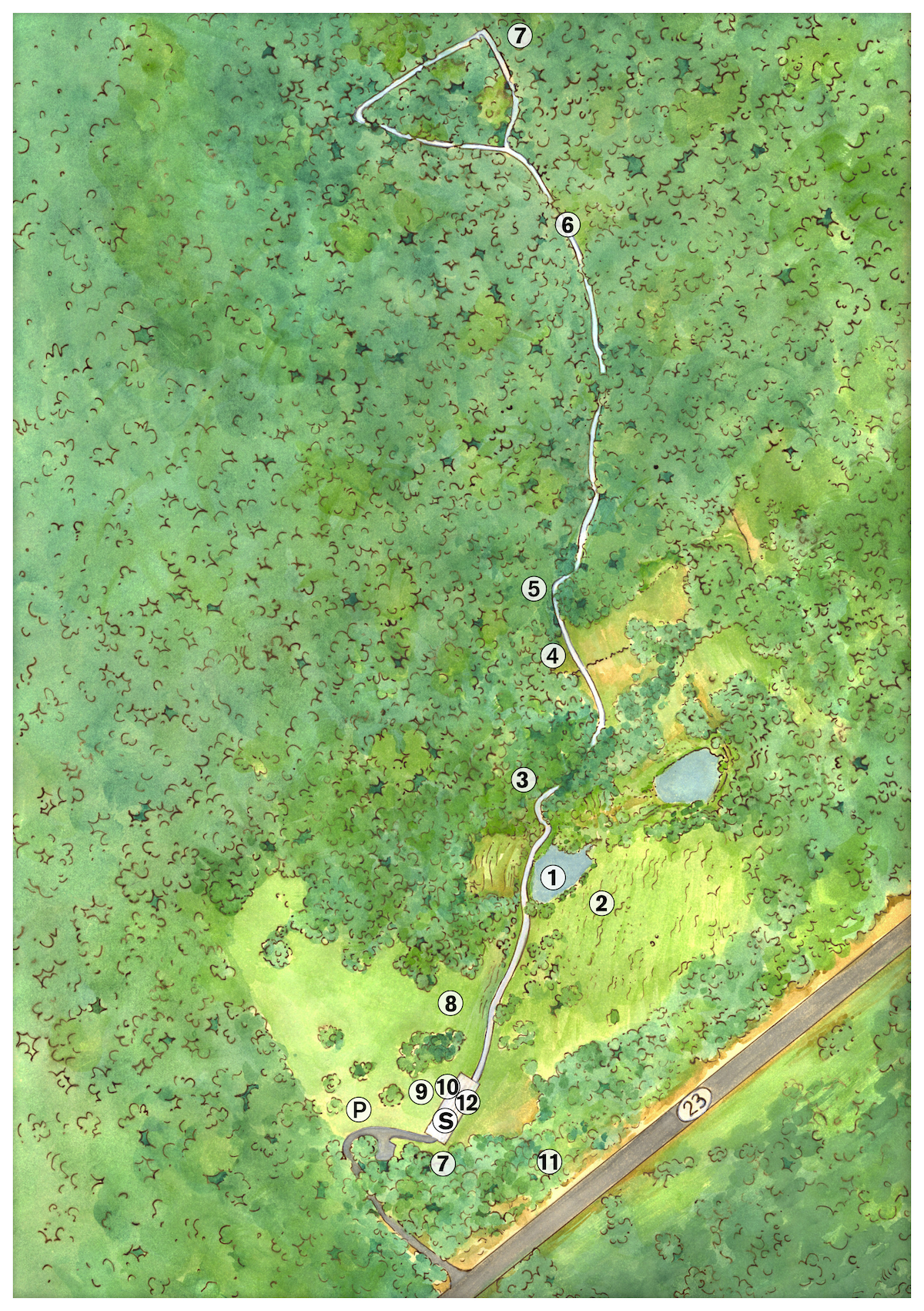